Washover nests are those dug by the turtle in sand deposited on the washover fans deposited across the marsh surface behind the backbeach berm. Washover fans are comprised of firm, packed sand, overlying the impermeable marsh surface. Washovers slope away from the sea and are normally thin layers overlying marsh mud and are saturated by water.   During spring tides, especially during nor’easter storms, sand is moved from the beach onto the marshes as washover fans (or into the maritime forest equivalents, in washins). These areas form large, level areas behind the beaches that remain dry between storms, and are therefore well heated by the sun. 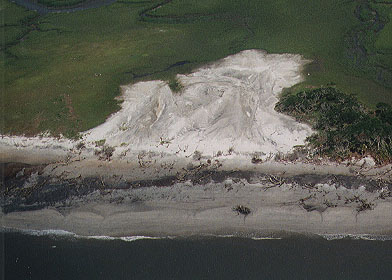 Washover fans form large flat areas that slope shoreward behind low berms backed by marshes. This washover fan is located near the north end of South Beach. The beach here consists of relict mud covered by a thin veneer of sand and an extensive skeletal tree “boneyard.”

Washover nests are therefore in a position where they will likely be inundated by the next storm tide set and the eggs deposited in them will be drowned. Washover sand is firmly packed and difficult to dig; tending to have shallow body pits, shallow egg chambers, and limited covering pits.

The fine grained sand of the washover is often strongly banded with alternating laminations consisting of heavy mineral and quartz layers, making sedimentary structures easy to see and the egg chamber discontinuity very easy to see. Because of their location on top of impermeable marsh surfaces, these nests are highly susceptible to flooding by rains and storm surges; they should be relocated if they are to have a chance to hatch. 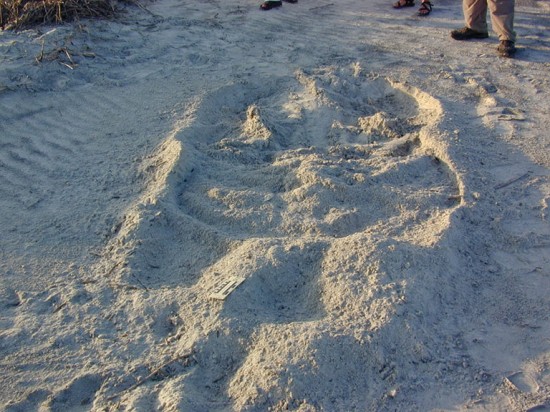 Nest [06-109] was deposited on the backbeach in the area shown above on the seaward edge of the washover fan shown above. 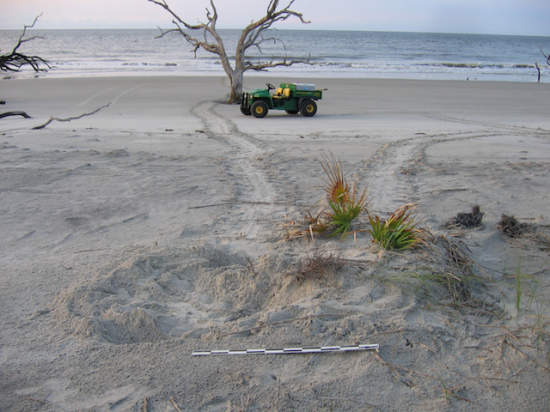 Nest [03-000] was deposited on a washover fan on North Beach. The turtle had trouble establishing a body pit in the damp, firm sand, but nested anyway.

When a washover nest hatches, emergence of hatchlings from nests left in place often causes the hatchlings to become disoriented as they head down slope and into the marsh.