Loggerhead turtles nesting on St. Catherines Island exhibit geographic clustering of their nests along the beach. The reasons for geographic clustering are not yet known. Just what parameters cause a turtle to select one nesting place over another, remain unknown. However, once a site is selected, Loggerheads exhibit a remarkable fidelity to that site, often returning to it to re-nest up to three or four times. Site fidelity is indicated by nests clustering at geographic points, even to the point of being deposited one upon another. 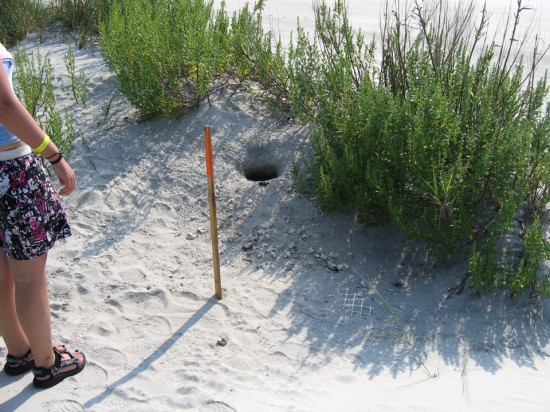 Temporal clustering is also evident when one plots the number of nests per day against the day of the year. The reasons for temporal clustering are also not yet known. It appears that once nesting begins, additional females are added in to the nesting population and synchronize somehow with those turtles already nesting. This gives rise to a remarkable graph that illustrates the synchronicity of nesting.

Because we don’t know why geographic and temporal clustering occurs, we have a prime opportunity to develop and test multiple scientific hypotheses to explain the observed phenomena. We invite you to plot the observed data and develop a hypothesis (or better still, hypotheses) to explain the observations and a plan to test each hypothesis in a sea turtle activity in the Activities Section.