Loggerhead sea turtles live their entire lives in the ocean as marine swimmers, except for periodically nesting on sandy beaches of the sub-tropical to temperate regions of the world. Female sea turtles mature at about 20 to 30 years of age, mate with one or more males in the ocean, and crawl onto sandy beaches to deposit their eggs. Each female deposits multiple (avg. 3.6 clutches/year), but don’t nest every summer. This gives rise to a strongly fluctuating pattern of sea turtle nesting in any given year. On the Georgia coast sea turtles, mostly loggerheads, nest from mid-May through August; eggs incubate for approximately 50-60 days, resulting in an annual nesting season spanning the interval from mid-May until mid- to late October. Each clutch consists of approximately 113 eggs the size, shape, and color of ping-pong balls.

The process of nesting in Loggerhead sea turtles is a hard-wired behavior that exhibits little variation. The sequence of activities involved in nesting is termed a “nesting ethogram.” The nesting ethogram of Loggerheads was described and exquisitely documented by Hailman and Elowson (1992) in Florida.

When a turtle comes ashore, her flippers, so beautifully adapted to swimming in the ocean, are used as legs in crawling across the beach in a cumbersome manner. This activity, crawling from the ocean onto the backbeach, leaves a distinctive trace on the beach surface, called an entrance crawlway. The crawlway consists of a track-like medial plastron drag flanked by a pair of alternating lateral flipper marks. The flipper marks across the Loggerhead crawlway exhibit distinct asymmetry with a steep-walled depression on the posterior due to the pushing of the flipper against the sand. V-shaped scratches are made in the sand by claws on the front flippers as the turtle crawls, the V’s open (get wider) in the direction the turtle was crawling, thus providing an important clue to the identity of the entrance and exit crawlways. 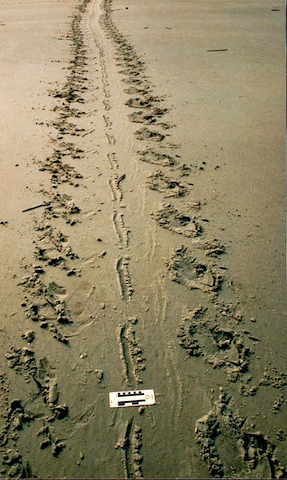 Loggerhead crawlway on firm forebeach preserves a record of direction of crawl and the presence of a barnacle on the turtle’s plastron.

In Georgia, some beaches are so erosional that turtles often have difficulty finding the necessary trigger to initiate the next step and may wander for great distances (wandering up to 1835 feet has been documented) until they begin to excavate a body pit. 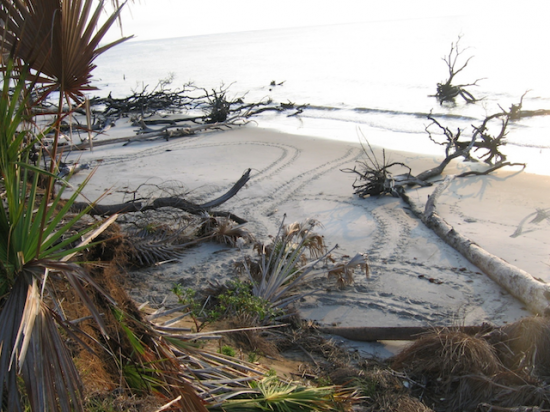 Once above the high tide line, and triggered by crossing from cool sand to warm sand, the turtle wallows and digs downward forming a body pit roughly the size and shape of her body and sloping backward until she hits damp sand (i.e. sand capable of holding a nearly vertical face). 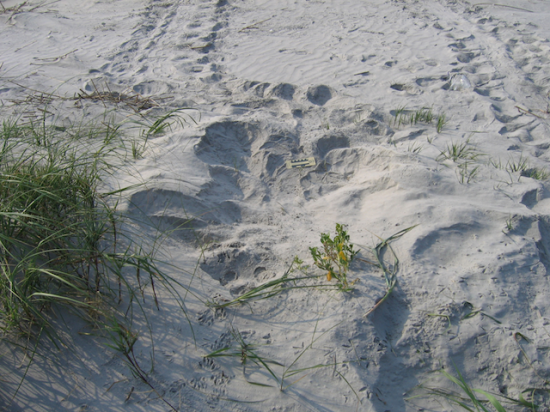 Body pit of nesting Loggerhead sea turtle that crawled in on north (left) crawlway, attempted to construct a body pit in sand that was too dry, moved forward and to her left (over small plant at center), nested [Nest 06-011] and exited on southern crawlway (right).

The loggerhead then digs an urn-shaped egg chamber with her rear flippers and deposits her clutch of eggs in it, backfills the neck of the egg chamber and tamps it down. Some turtles excavate multiple egg chambers (up to four have been documented), aborting egg chambers when their flippers encounter very wet sand, a soil horizon and/or peat, or buried logs. The backfilled egg chamber is packed with bioturbated sand “chips,” giving rise to an egg chamber disconinuity appearing as a bull’s-eye in the laminated sand that underlies the bioturbated sand of the covering pit. 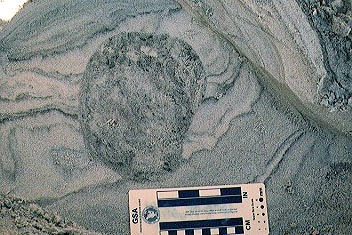 Loggerhead egg chamber discontinuity exposed in laminated nackbeach sand underlying covering pit of sea Turtle. The ‘brecciated” or broken-up angular sand chunks filling the egg chamber neck are obvious in contrast to laminations of backbeach, as is the softness of the filling in contrast to the firm sand surrounding it.

Once eggs are deposited and the egg chamber neck is backfilled, the turtle enters a covering behavior throwing sand back over the body pit as she scoots forward and rotates. This action forms a covering pit or nest and disguises the position of the egg chamber. Flipper scarps are often produced as the turtle rotates, forming the outside of the covering pit. 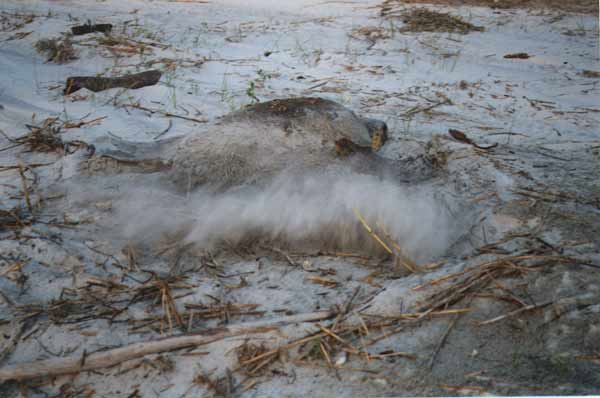 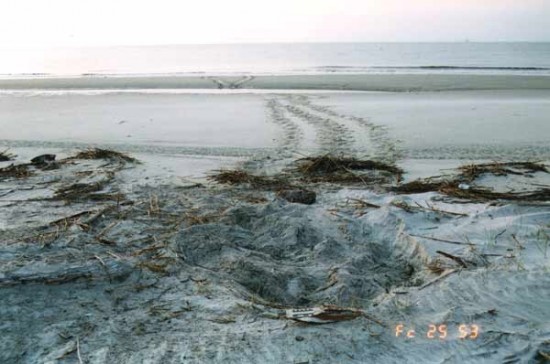 Backbeach nest deposited immediately behind Spring High Tide Line (marked by wrack line) by sea turtle covering in above figure, showing disturbed (bioturbated) area of covering pit and the exceedingly long entrance and exit crawlways indicating turtle nested at low tide. This nest [98-086] was subsequently moved due to its deposition in a highly erosional area.

When finished covering the female then crawls back to the sea forming an exit crawlway. Crawlways can be identified by the direction V’s open, push-marks with steep faces posterior, and often by cross-cutting relationships of crawlways (the older being crossed by the younger). 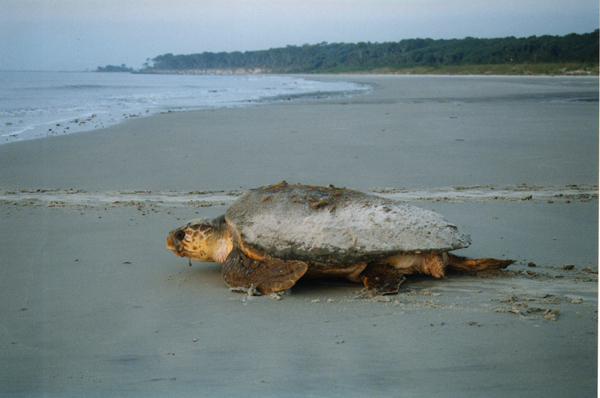 This nesting process is repeated an average of ~3.9 times every 2-4 years by each nesting Loggerhead, with a range of 1-8 nests per nesting season (Spotila, 2005).