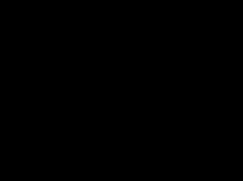 A view of South Beach at night on a new moon to show what a sea turtle would see when she crawled onto the beach to nest.

Emerging in the early night under the cover of darkness to deposit her eggs, a Loggerhead turtle will spend approximately one hour on the beach during a typical nesting sequence. The females must crawl from the sea in total darkness, find a suitable nesting site above the high tide line, excavate her body pit and egg chamber, deposit her eggs, and return to the sea. In performing these actions she is often interrupted before digging her nest and returns immediately to the sea without nesting. The resulting crawlway, a non-nesting crawlway, is evidence of the unsuccessful attempt. There generally are about twice as many non-nesting crawlways as there are nesting crawlways, indicating about a 50% success rate in fining a suitable place to nest. It is not clear if non-nesting crawlways are aborted nesting attempts or a behavior evolved to frustrate predators, or both. 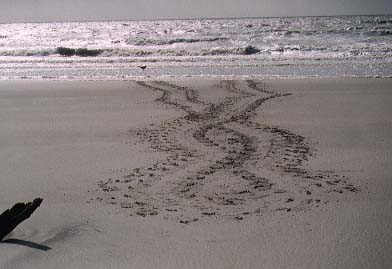 Non-nesting crawlway of loggerhead sea turtle on South Beach showing pathway turtle followed as she approached the beach to nest. Tree stump on left is part of a buried tree.

Non-nesting crawlways may be simple loops indicating the turtle immediately returned to the ocean, perhaps being spooked by activity on the beach; or by more extensive wandering crawlways indicating a concerted effort by the turtle to locate a suitable nesting site. Such crawlways are often found in areas with undesirable habitat such as erosive areas, often attesting to several abortive attempts to find a nesting site as the turtle moves laterally along a beach scarp. Attempts to nest may be marked by body pits dug into the beach and sometimes by partially dug egg chambers, both of which are left open. 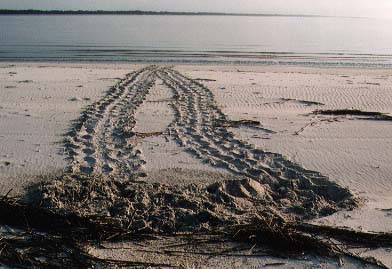 Nesting crawlways are marked by disturbed areas hiding the nest, signs of covering activity by the turtle such as flipper scarps, thrown sand, and by crawlway lengths of differing lengths, evidence of a significant time spent on the beach. Nests tend to be elliptical areas about 2.33 m long and 1.97 m wide consisting of disturbed (bioturbated) sand 20-30 cm thick, with obvious surface disturbance.

Loggerhead sea turtles nesting in Florida nest in soft ‘loamy” sands with a considerable slope on the backbeach, giving rise to relatively simple nests, “Florida nests.” In Georgia, turtles are confronted with wider beaches and much more compact sands on the backbeach which often is erosional and carries remnants of eroding maritime forests and fossil soil horizons. 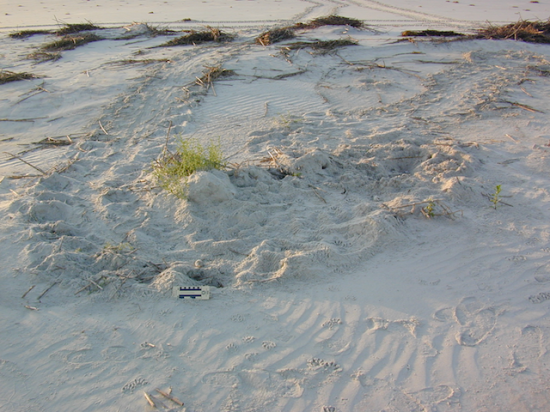