Discussions with leatherback experts at the Atlantic Leatherback Conference in January 2005 suggested leatherback nesting might begin significantly earlier than loggerhead nesting on the Georgia coast as the leatherbacks migrated past Georgia. Bishop’s 2005 schedule allowed him an earlier inception of the program and monitoring was done April 27 and 29, and daily beginning May 1.

Two early leatherback crawlways were observed and documented on May 8 (31.58908N; 81.15251W) and May 9 (31.60186N; 81.14653W) on South Beach and excavated by shovel; the first with assistance the AMNH Archeologists and the second by GAB. No eggs were found at the time of excavation in either site, but each nest was documented by sketching and by photography.

On July 20, 2005 egg shells from the second nest were observed by Nancy Marsh on the surface due to scavenging of the unhatched clutch by Ghost Crabs and Raccoons. This clutch [05-090w] was immediately excavated and found to consist of large eggs and small eggs. An egg necropsy was performed by WSC veterinarian intern Kim Stewart (a former St. Catherine’s sea turtle intern in 2000 and graduate of St. Kitt Veterinarian School (2006)) who found no development in eggs from this clutch. 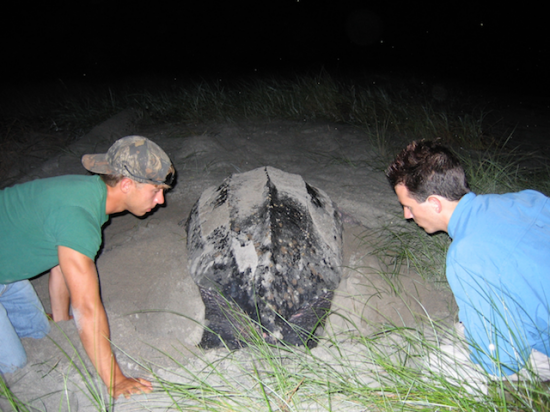 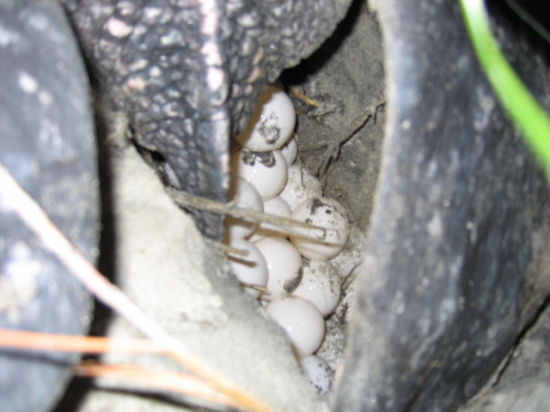 A third leatherback was observed nesting (05-070; @ 31.67382N; 81.13762W) by Matt O’Connor, WSC intern, on the night of July 05, 2005. Matt called the observation in on Island radio and Clint and GAB responded arriving on North Beach at approximately 11:50 PM. The small leatherback continued digging her egg chamber until 12:00 and began depositing eggs continuing this process until 1:05 AM (7/06/05). While egg deposition was occurring her flippers were checked for tags, three of which were present and documented. 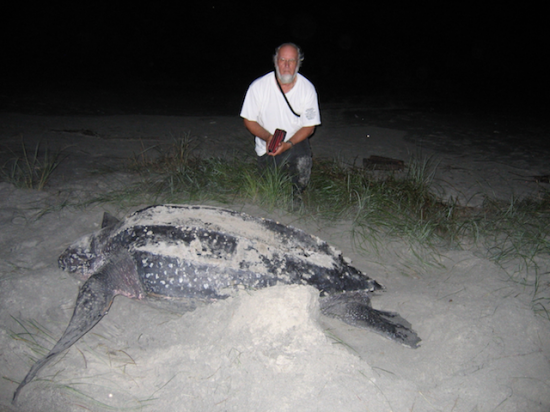 After depositing her eggs, the Leatherback began covering activity and maintained fidelity to that behavior for about 1 hour and 10 minutes. 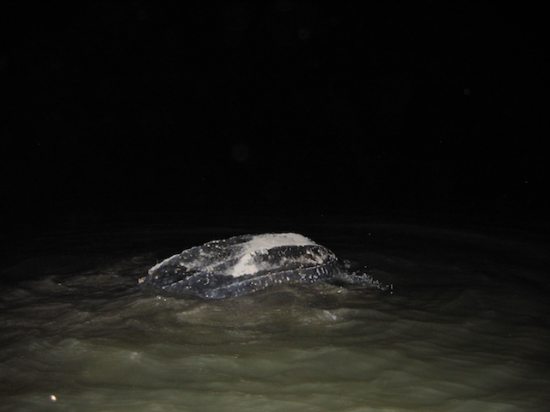 After covering, the Leatherback crawled 240 feet to return to the Atlantic Ocean, having to crawl across relict mud of Seaside Ebb Delta.

At about 1:05 AM the turtle began an extensive covering repertoire that continued until 2:15 AM. This repertoire first involved backfilling and tamping the egg chamber with rear flippers, then piling of sand mounds with synchronous front flipper sweeps, followed by repeatedly crawling across and around the covering area that apparently resulted from excavation of an open egg chamber to the north end of the nesting area.   The turtle then left her nest and crawled approximately 240 feet (73.2 m) across the sandy back-beach and relict mud on the fore beach to the water’s edge and into the sea for approximately another 100-150 feet (30.5- 45.7 m) to reach water of sufficient depth to swim. 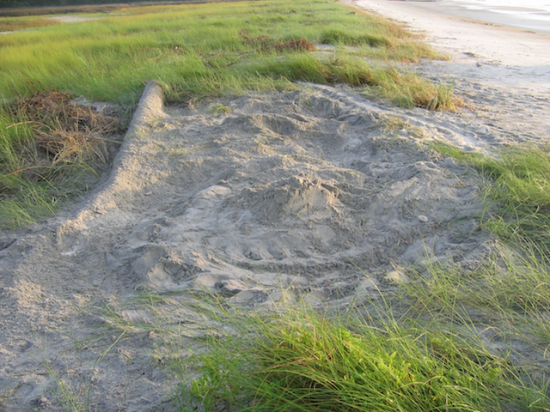 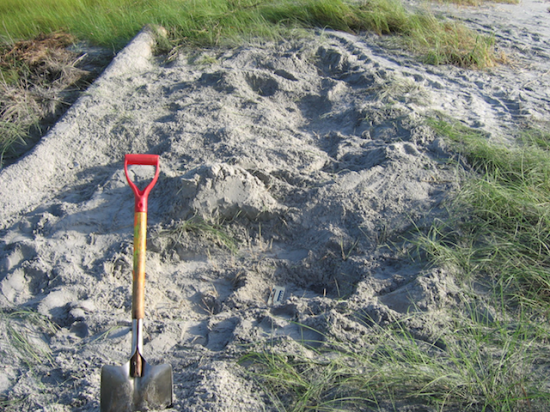 Validation of Nest 05-070 was expedited by having marked the position of the egg chamber during nesting.

Because this leatherback was observed nesting, the position of the clutch was marked by lines outside the nesting area and the nest was extensively documented by sketching and photography the next morning and the clutch of 105 eggs relocated to a lower risk site (05-070a) further north on North Beach (31.68809N; 81.13305W) where it was screened and caged. 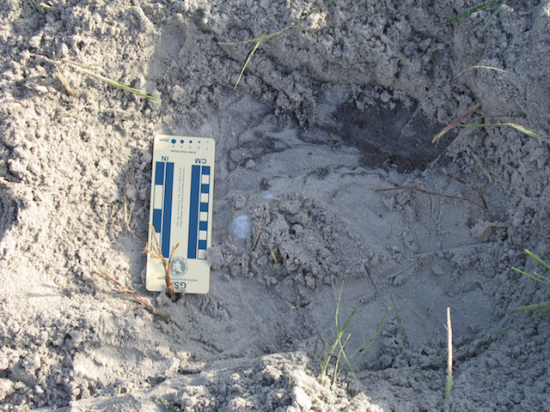 The egg chamber was easily located because it had been marked. But for that, an extensive search would have been necessary within the root masses of grasses. 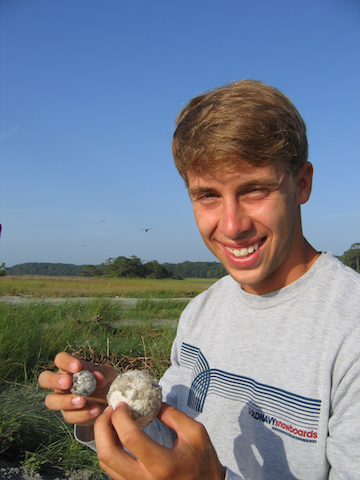 Leatherback eggs are large if yolked and mixed with small, unyolked eggs.
This leatherback nest was 7.0 m long and 3.0 m wide oriented N14oE parallel to the beach and constrained on the west by a pine piling or log. The clutch was relocated, conserved, and monitored. Two of the eggs appear to have hatched, but no hatchling crawlways were observed. 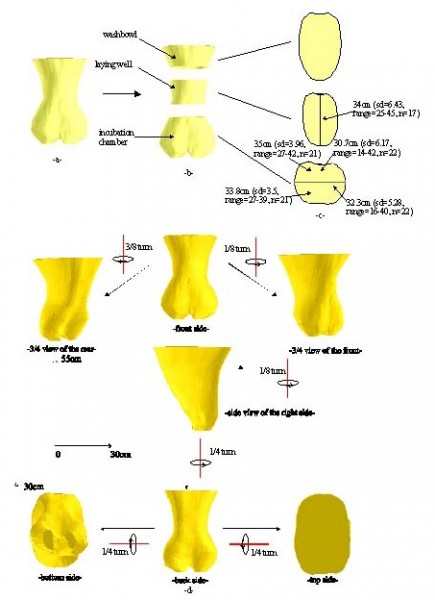 Cast of a nest of Dermochelys coriacea (the first 15 cm of the upper part of the nest do not appear in the cast) from a: front view of the whole cast . b: the cast split into three different parts. c: horizontal cross sections made in the middle of each part of the nest; measurements taken in natural nests on Yalimapo beach are shown on these cross-sections. d: the cast is viewed from different sides. The axis and degree of rotation applied to the cast are shown along the arrow joining one view to the next. (Image modified after Alexis Billes & Jacques Fretey, Marine Turtle Newsletter, 92: 7-9).