When turtles crawl from the sea and approach the backbeach they may crawl onto the face of the first dunes, or occasionally even cross behind the first dunes, to nest. Because turtles are sensitive to slopes, they are easily redirected by dune slopes, and in the dark of night, often become disoriented and lost. Dune nests are therefore highly variable in their position and in the positioning of the egg chamber within them. Dune sand is soft and easily dug; dune nests tend to have deep body pits, deep egg chambers, and extensive covering pits. 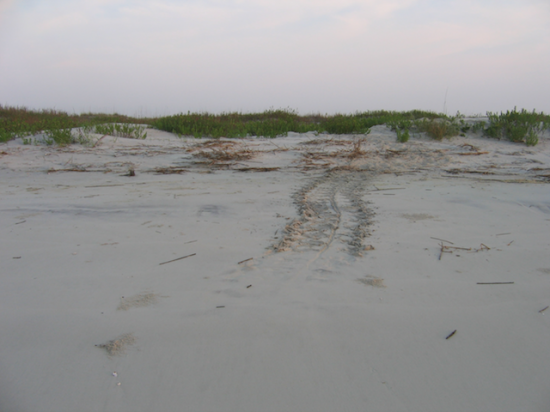 Entrance and only crawlway for turtle nesting on McQueens indicating turtle is still on the beach at daylight. Walking the crawlway demonstrated a nest [Nest 06-010] followed by a wildly wandering crawlway back into the dunes … a lost turtle! … who was found at the end of her crawlway, exhausted. 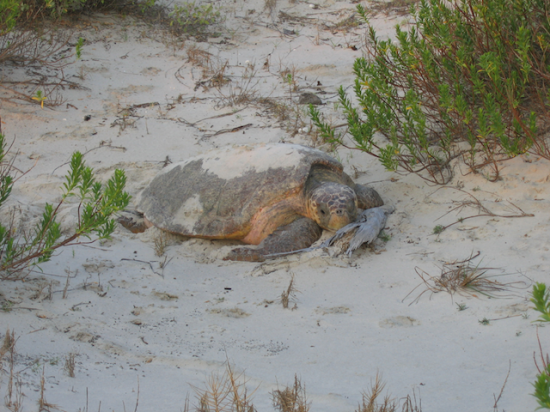 The fine grained sand of the dunes is often only lightly banded with laminae of heavy mineral grains, making sedimentary structures very subtle and the egg chamber discontinuity difficult to see. Because of there elevation, the sand is often dry to several decimeters making the search for egg chambers difficult. 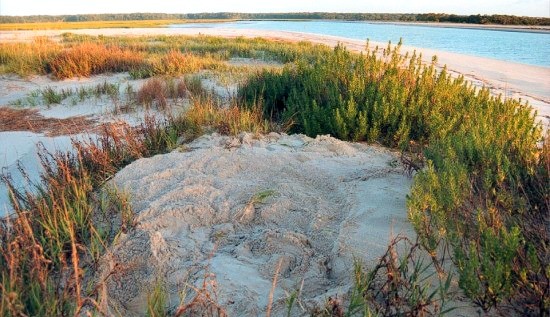 Dune nest deposited by turtle on barren top of dune at McQueens Inlet on the north end of South Beach [99-065]. 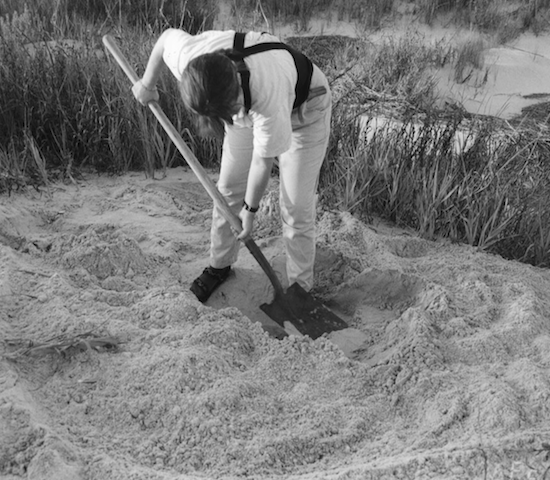 Digging dune nests is not a black and white operation, it requires a keen eye to spot the subtle laminations often seen in dune sands [99-065].

The loamy sand of the dunes, their position well behind the storm high tide line, and their elevation generally makes dune nests very successful. However, they are extremely vulnerable to vagrancies of the wind and to erosion by strong storm surges. Dune nests may erode by changes in wind direction and velocity, or be deeply buried by them. 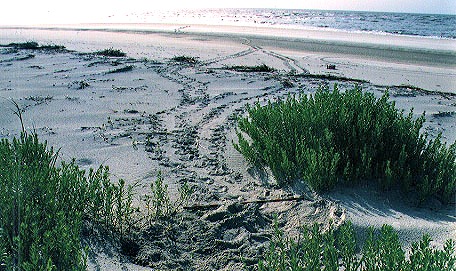 Upon emergence of hatchlings, dune slopes again become very important as they strongly influence the direction hatchlings crawl. Nests must be situated on seaward sloping faces. Under spurious slope clues, hatchlings may even crawl away from the sea and wander widely before they attain the relative safety of the sea. If a nest is on a slope away from the sea or behind a dune blocking the way to the sea, it should be moved into a more favorable position.

Because dune fields grow near inlets, they are susceptible to erosion from the ocean-side and also from the inlet side. On St. Catherines, we find it necessary to move nests well back from the northern end of South Beach where erosion rates are accentuated on nor’easters as the ebb delta shoals are overtopped by flood tides, dramatically increasing the fetch of northeasterly winds.