Historical nesting of Loggerhead Sea Turtles on the Georgia Coast (after GaDNR).

Sea turtle nesting in Georgia has been tracked since 1964 on Little Cumberland Island, 1965 on Blackbeard Island, and 1973 on Wassaw Island and is now being tracked on virtually all 12 Georgia Barrier Islands. The statistical trend of declining Loggerhead nests became statistically significant in 2004 at a 1.2%/year decline.

Nesting on St Catherines Island is compiled as part of our Summary of Productivity. 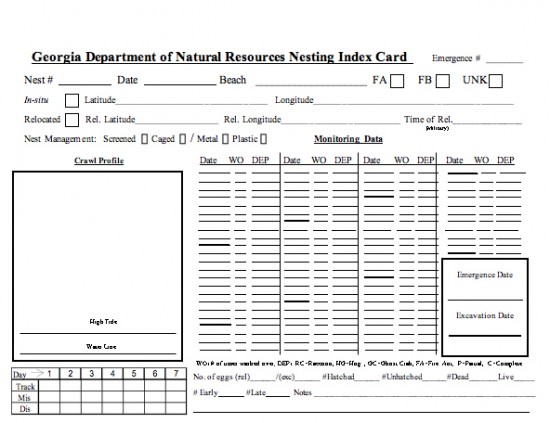 The Georgia Department of Natural Resources recommends keeping a nest record for each nest on a separate card. The St. Catherines Sea Turtle Program keeps the same information on Monitoring Sheets and formerly kept it on a database, saving space in the field notebook.

Soon, the Georgia Southern University Sea Turtle Program @ St. Catherines Island will develop a database formatted to support the GaDNR Card System and we will be able to visually present individual nest histories downloaded from the database, and, we hope, uploaded onto web pages, either as individual nests, or as aggregate records.

About 1994 we began tracking the number of nests deposited and emerged by day of the year. This led to the ability to graph nests/day against time and integrate the data with rainfall data and summer storms. A crude sliding bar was devised in 1996 (as a separate object in AppleWorks) with a 60-day spacing allowing an estimate of number of emergences that might be expected during the hatching season. This concept seems worth formally pursuing in 2007 in order to calibrate the bar-slider with a script to adjust its length according to degree-days.