Seven species of sea turtles, all threated or endangered, currently inhabit the World’s oceans; only four species (listed in bold) are commonly found in the coastal waters of the Georgia Bight: 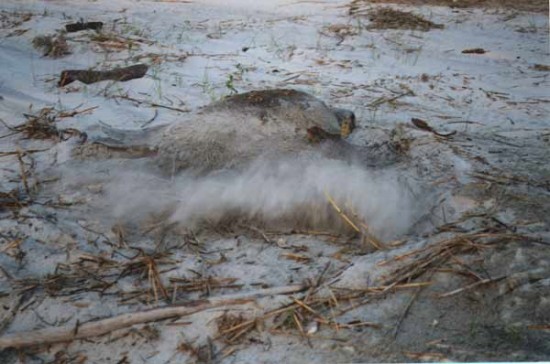 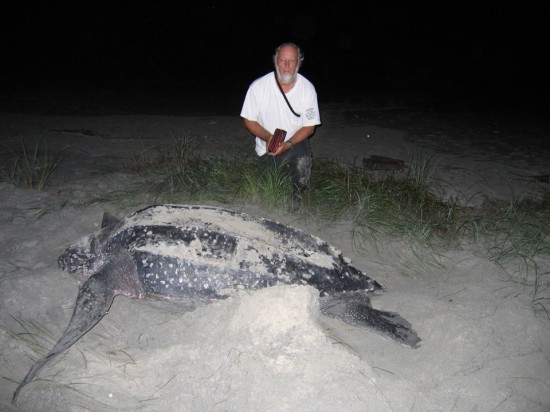 In addition to fully marine sea turtles, the marshes and lagoons of the eastern seaboard, including Georgia, also contain another species of marine turtle, the Diamondback Terrapin, Malaclemys terrapin (Schoepff, 1793), adapted to life in brackish salt water. Diamondback Terrapins have been seen attempting to nest on road beds and behind the beaches of St. Catherines. They are small turtles, approximately eight inches across, with legs and clawed toes only slightly adapted from a terrestrial mode of life. Their nests are usually well above the storm high tide line. 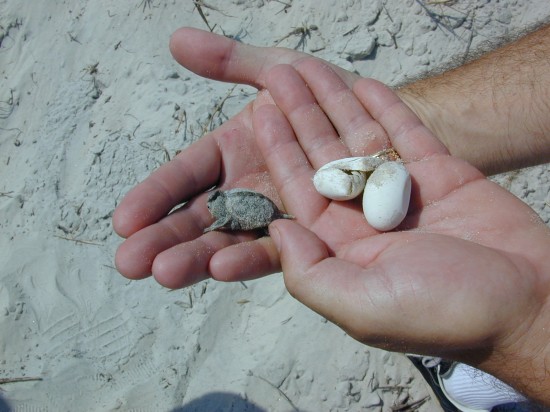 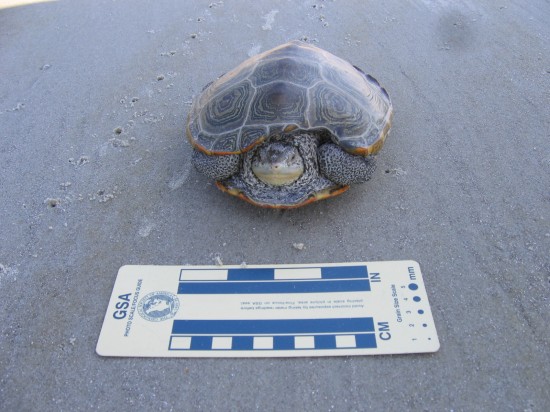 Diamondback Terrapin female with damaged carapace after nesting on Sapelo Sound. Note crawlway to left of turtle and carapace damage.

The species of sea turtles which are encountered on the Georgia Coast include the Loggerhead Turtle (Caretta caretta), the Green Turtle (Chelonia mydas ), the Leatherback Turtle (Dermochelys coriacea), Kemps Ridley Turtle (Lepidochelys kempi), and the Hawksbill Turtle (Eretmochelys imbricata). These turtles are similar in gross morphology but can be differentiated by use of a taxonomic key (“Leave Only Bubbles“) 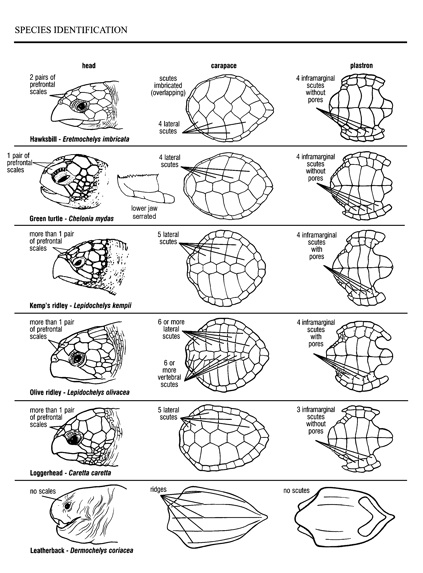 Turtle has scutes arranged in a distinct patterns forming medial, lateral, and marginal positions on the carapace. Go to Step 2

The turtle has four lateral scutes. Go to Step 4

The turtle has more than four lateral scutes. Go to Step 5

The medial scutes are imbricated and the beak is “hooked”. Hawksbill Turtle

The medial scutes are not imbricated and the beak is not noticeably hooked. Go to Step 6

Along the posterior margin of the plastron there is a small terminal scute at the centerline. Kemp’s Ridley Turtle

There is no terminal scute at the centerline along the posterior margin of the plastron.  Loggerhead

The posterior margin of the carapace is pointed, not rounded.  Black Turtle

The posterior margin of the carapace is rounded. Go to Step 7

The lateral scutes of the carapace are noticeably larger than the medial scutes. FlatBack Turtle

The lateral scutes of the carapace are nearly the same size as the medial scutes. Green Turtle