The Late Cretaceous seas contained many swimming marine reptiles that reached gigantic proportions, including 30 foot-long mosasaurs, 60 foot-long plesiosaurs, and 15 foot-long sea turtles. These marine reptiles joined toothed diving birds (Hesperorinus and Ichthyornis) and flying reptiles (pterosaurs) to comprise a suite of large animals that fed on the abundant food resources of the Late Cretaceous seas; the bivalves, ammonites, squids, and other invertebrates. The mosasaurs, plesiosaurs, pterosaurs, and diving toothed birds joined the dinosaurs and in the mass extinction at the end of the Cretaceous, an event that killed off 75% of the plants and animals alive during the Cretaceous and set the stage for the evolution of modern life forms. Of all these gigantic reptilian life forms, the one that survived (Gaffney, 1975) was the sea turtles!

Because sea turtles nest in a dynamic environment with a low probability of preservation and their modern traces are largely unknown to most geologists and paleontologists, their ichnology still remains relatively poorly known. However, by studying modern sea turtle traces it is possible to predict what analogous trace fossils will look like when preserved in sedimentary rocks of Cretaceous to Holocene age.

The abundance of body fossils of sea turtles attests to their presence and abundance in many regions from Early Cretaceous to present; and indicates that they must have nested on sandy beaches in those regions during the same time interval. Even though the preservation potential of back beach sediments is low, the very number of sea turtles and their prolific nesting behavior would be expected to produce a high potential for preservation where back beach sediments are preserved. 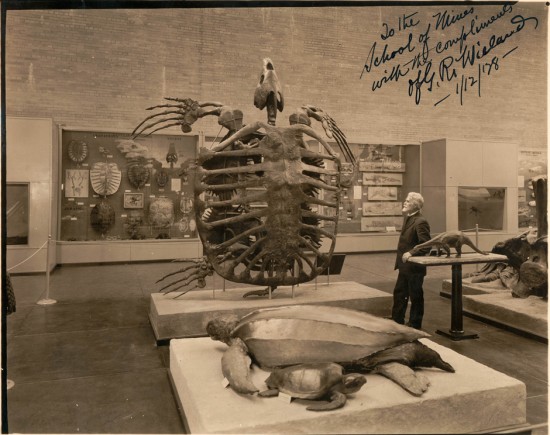 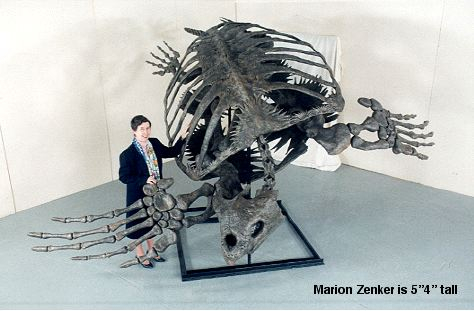 This hypothesis was promulgated at the annual meeting of the Rocky Mountain Association of the Geological Society of America (Marsh and Bishop, 1996) in an attempt to bring modern loggerhead sedimentary nesting structures to the attention of western geologists who might have seen, or might be expected to see, analogous fossil structures in the Cretaceous of the Western Interior Basin. During a subsequent study for E. I. DuPont on Ghost Shrimp burrows in 1997, an enigmatic sedimentary structure was studied in the Cretaceous Fox Hills Sandstone near Limon, Colorado. 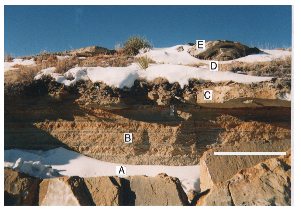 This forebeach to backshore facies tract near Limon, Colorado, southeast of Denver, contained a suite of fossilized sea turtle nesting structures that included two nests, a crawlway, and a body pit (A, foreshore; B, backbeach; C, washover fan; D and E, dunes).

These structures proved to be the world’s first documented fossil sea turtle nest structures. The sedimentary structures, consisting of two egg chambers, a body pit, and a crawlway, were collected in May 1998 by the Museum of Geology, S.D. School of Mines and Technology. 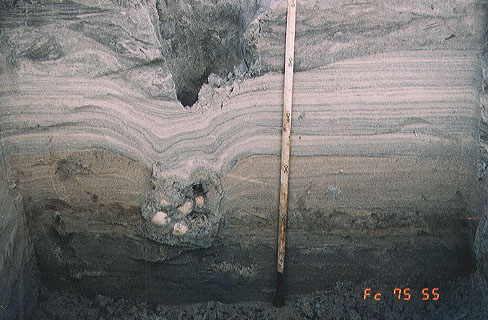 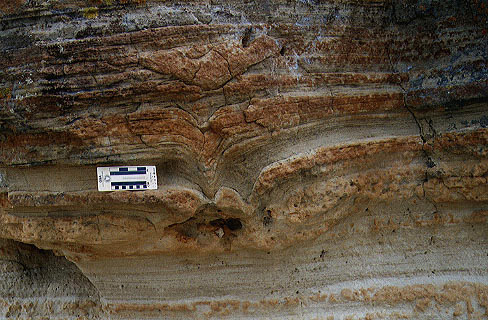 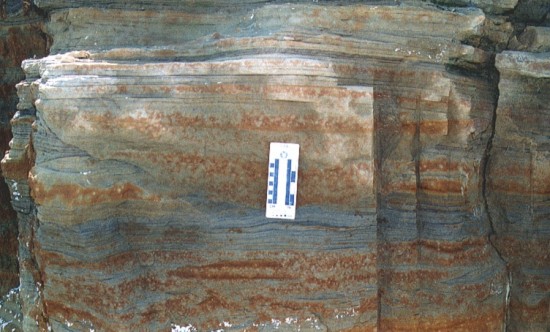 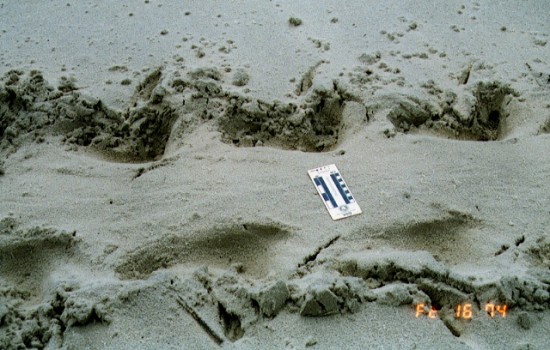 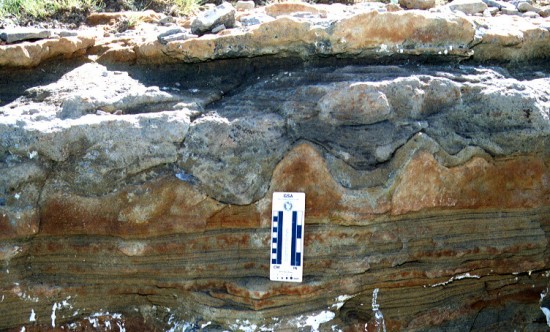 This scientific discovery represented a major collaboration between a corporate partner, local land owners (Frasier Farms), and three academic organizations (Georgia Southern University, S.D. School of Mines and Technology, and Portal High School). It also illustrates the scientific process in action. In spite of the “steps” of the scientific methods that we memorized in grade school, scientists often make breakthroughs by observation of anomaly, by intuition, or by communication with colleagues leading to insight and often, to new lines or research. Such was the case in the time of inception of the St. Catherines Sea Turtle Program, and again as the background of Western Interior paleontology and its complement of sea turtle body fossils interacted with the knowledge being accrued in working in the St. Catherines Program. 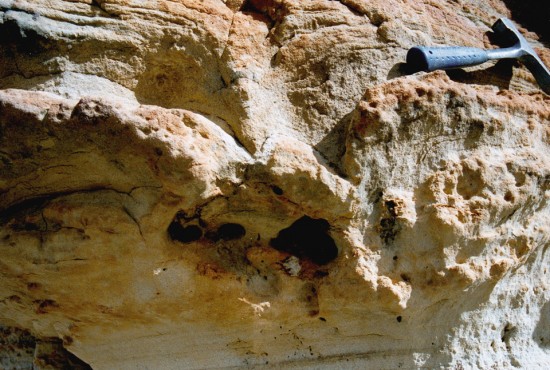 The bottom of the Cretaceous Sea Turtle Nest in Colorado has egg molds preserved in its bottom.

In this case we had formally formulated a hypothesis, “That body fossils in the Western Interior Seaway meant that sea turtle nests must also have been, or be, present,” (Marsh and Bishop, 1996). What a surprise when I was shown an “enigmatic sedimentary structure” by colleagues Fred Pirkle, Roger Smith, and James Barron in an outcrop of Fox Hills Sandstone on Titanium Ridge, while studying Ghost Shrimp burrows to attempt to delineate Cretaceous shorelines in the exploration for heavy mineral deposits along ancient shorelines of the Western Interior Seaway.

“The structure was immediately recognized as a fossilized sea turtle nest, but when pressed I hedged to mentally test my conclusion before announcing to my colleagues that we had apparently not only identified the first described fossilized sea turtle nest in the world, but we also had precisely located a shoreline in the Cretaceous Seaway! When pressed to share my interpretation, I told colleagues I thought I knew what it was, but wanted to mull it over for a while, so Barron and I hiked around Titanium Ridge, a trip taking about an hour or so, saw another interesting set of structures about 10 m from the first structure, then returned to the structure in question. Colleagues then pressed me for my interpretation, and I shared my original deduction, a fossilized sea turtle nest! Incredulity abounded! What evidence?

I explained the structure’s origin, its egg molds indicating (at least) some unhatched eggs, a collapse and infilling of the egg chamber (twice) forming the cone-like overlying structures. What did it mean regarding shoreline position? Well, the shoreline was right here, as I was leaning against the cliff face with my hand against the outcrop at the top of the structure! Faces lit up with understanding, and then back to science … can you prove it? Yes, I have a photograph of the exact modern model of a collapsed nest at St. Catherines and a photograph depicting the analog for this Cretaceous environment.”

Subsequent work on that outcrop documented the second enigmatic structure as a cross-section of a crawlway, the presence of a body pit, and the presence of a structure thought to be a washed-out egg chamber (now at the Limon Museum). The suite of sedimentary structures was set into a sequence of beds representing a shoreline regression (forebeach, backbeach, washover fan, and dune sands) replicating via Walther’s Law the shoreline facies tract seen on St. Catherines Island.

The Search for Nests of the Giant Cretaceous Sea Turtle:

G. R. Wieland described Archelon ischyros in 1895 from a specimen collected in South Dakota and now exhibited in the Yale Peabody Museum (YPM 3000). A more complete Archelon, discovered in 1976, was collected by Frank Watson in Shannon County, in southwestern South Dakota, near the Cheyenne River at Buffalo Gap during the mid-1970s, Initial preparation and stabilization of the fossil was done by Peter Larson of the Black Hills Institute of Geological Research for Siber & Siber of Zurich, Switzerland. Siber & Siber sold the partly prepared specimen to Naturhistorisches Museum Wien, Austria. Preparation and mounting were completed by Naturhistorisches Museum Wien staff for display as the centerpiece exhibit of the Viennea Museum, where it resides to this day. Dr. Kraig Derstler of the University of New Orleans, who studied this specimen (Derstler, personal communication [1992]), said: “Without exaggeration, the Vienna museum specimen of Archelon ischyros is one of the world’s great fossils.” Because modern sea turtles are all endangered or threatened and fighting for their survival, Archelon is an especially poignant fossil and serves as a reminder of Earth’s many endangered species. This charismatic position of this giant sea turtle is substantiated by the selection of Archelon ischyros as the U-Haul SuperGraphics icon for South Dakota. The National Geographic Society included a scaled diagram of Archelon ischyros in its “Monsters of the Past” web site. 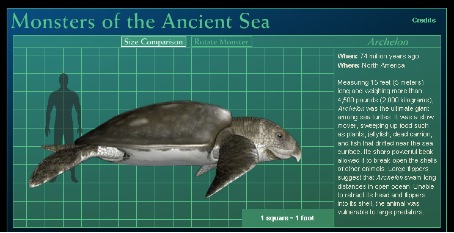 Depiction of Archelon ischyros illustrated to scale (grid = one foot) and with human outline. This is the best depiction of the living morphology of Archelon (courtesy of National Geographic Society).

Using the unanticipated success in finding the first nesting structures in Colorado, we have postulated the presence of Archelon nests on the black sand shoreline deposits of the Western Interior Seaway and modeled their probable appearance on St. Catherines island. The immense size and weight of Archelon would result in nesting structures of equally immense size, perhaps as large as 45-50 in length and three to four feet deep. Any instability in the sand beach would likely result in flow structures under the estimated 4500-pound weight of the turtles. From the diagram National Geographic provided (above) one can estimate the reach of the rear paddles (approximately four feet) when excavating an egg chamber in the bottom of the body pit, forming a sedimentary structure reaching five to six feet deep! This immense sedimentary nesting structure would likely not be recognizable by modern geologists or biologists! 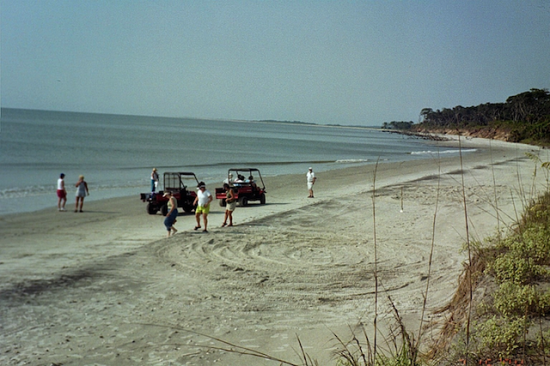 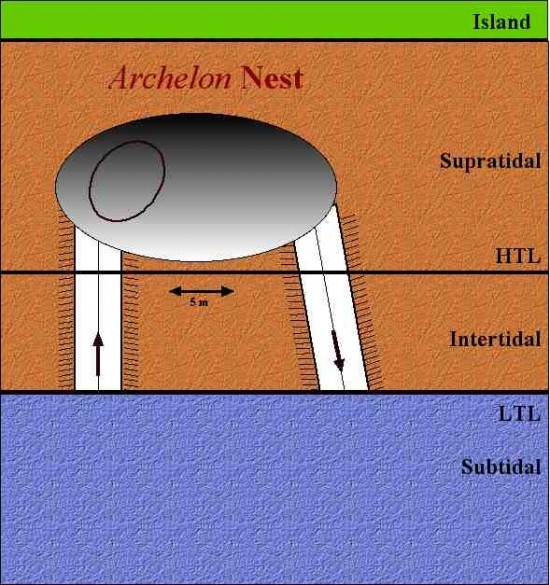