Reptiles are a group of vertebrates, animals with backbones, they are generally cold-blooded (body temperature is close to that of their surroundings), have scales on a dry skin, undifferentiated teeth, and reproduce sexually by laying amniote eggs (eggs which have a waterproof membrane allowing them to develop outside of water). 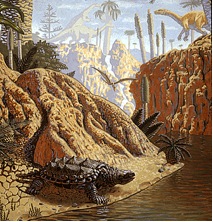 Restored environment of Proganochelys (the oldest known turtle) during the Late Triassic in Germany. A few early sauropodomorph dinosaurs (Plateosaurus) can be seen above Proganochelys (image from painting by Frank Ippolito, copyright 1987 published by Gaffney 1990 American Museum of Natural History.

Turtles are a group of reptiles in which the bones have become modified to encase the body in a more or less rigid, continuous armored case with only the legs, tail, and head exposed. The skull of all turtles lack the lateral temporal fenestrae (openings in the side of the skull) characteristic of all other extant and most (but not all) other extinct amniotes. All modern turtles lack teeth, although ancestral forms possessed undifferentiated teeth. Large post-temporal fenestrae (the large holes in the back of the skull) of turtles allow the jaw musculature to expand beyond the confines of the skull’s adductor chamber. This expansion allows the jaw muscles to be stronger and permits a wider gape. 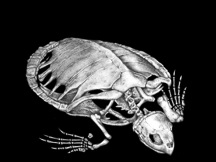 The top shell (carapace) of turtles is formed from ribs that are generally expanded and fused together, the bottom shell (plastron) is formed by fusion of a group of bones not present in all vertebrates. The evolution of a rigid box-like body allows few further changes of body morphology, forcing the legs to be horizontal, allowing only for retraction of exposed parts into the armored shell, a shoulder girdle in which the shoulder components lie within the rib cage (which is modified into the carapace and plastron) , and a unique arrangement of vertebrae which are fused to the inner side of the carapace.

Sea turtles are turtles that live in the sea after hatching from eggs deposited on sandy beaches. The life of these turtles in the oceans have led to modification of these turtle’s legs into flippers. Other significant changes were also necessary for turtles to colonize the sea including development of large salt glands, an adaptation to continuous life in salt water.

There are seven kinds (species) of sea turtles; Loggerheads, Green Turtles, Kemp’s and Olive Ridleys, Australian Flatback, Hawksbills, and Leatherbacks. All sea turtles are similar in that their legs are modified into flippers, their heads, legs, and tails can not be retracted into their shell, all spend their entire life at sea except for nesting and hatching, and all take a long interval of time to mature to reproductive age. Significantly, all sea turtles are also in danger of becoming extinct.