St. Catherines Island is one of 12 barrier islands, The Golden Isles, fringing the Georgia coast at the head of the Georgia Bight. The coastline has a 2.0 m tidal range with moderate wind generated waves averaging 0.25 m in height. The Golden Isles are elongate barrier islands broken by numerous sounds into relatively short, discrete segments which act as semi-independent sedimentary cells with a net southward transference of sediment (Oertel 1974). Parts of the coast actively receiving fluvial sediment have built discernible deltas seaward that are rapidly modified and redistributed forming chenier-like deltas built as wedges subparallel to the strand. 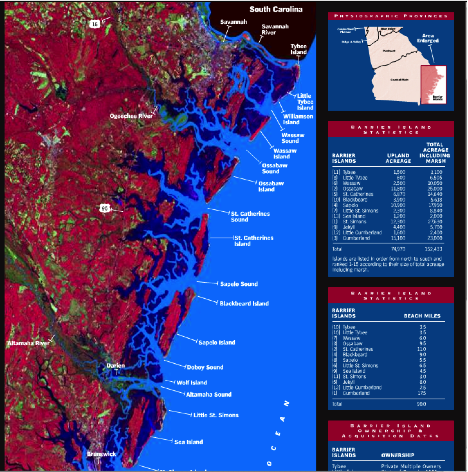 The Georgia Coast and its Golden Isles. (With permission from SherpaGuides). 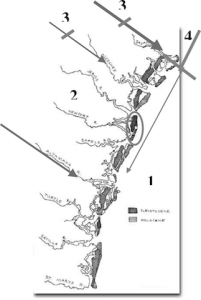 St. Catherines Island is exceptionally erosional because 1) Sea level is rising at about 2.8 mm per year, 2) The Jerico and Newport Rivers are not through-flowing sediment-contributers on the Georgia Coast, 3) Through flowing, sediment-bearing rivers to the north have been dammed, trapping the sediment load before reaching the modern coast, and 4) Dredging of the Savannah Ship Channel removes sediment from the southward transport system. Note the chenier-like delta wedges south of the Savannah River and south of the Altamaha River.

Beaches on Georgia’s Barrier Islands are dynamic systems dominated by semidiurnal tides,which directly affect the intensity of storms, waves, and winds. Tidal energy is generated by an average tidal range of ~2.7 m semidiurnal tides (two highs and two lows each lunar day) (Thurman, 1993), with two sets of high-range Spring Tides and two sets of lower-range Neap Tides per lunar month. The Georgia coast is characterized by a low wave energy (normal summer wave heights = 0.25 m) regime that is dissipated on barrier island beaches. Transfer of sand by wind is a significant process on some islands, particularly because of the wide beaches and extensive ebb deltas exposed during low tides. Major modifications of the shore are made during short but intense storms that may include occasional hurricanes, but typically include storms systems which generate moderate to intense northeasterly winds, called Nor’easters. 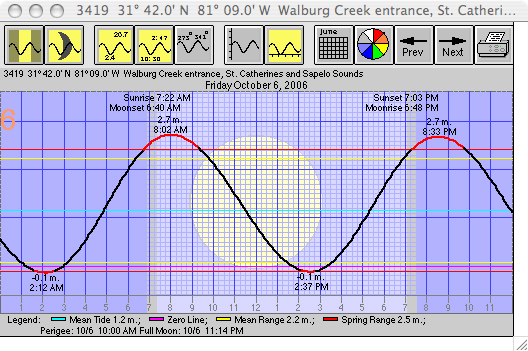 Nor’easters occur throughout the year and, particularly during the Fall and Winter; and when combined with high spring tides, they can rapidly rework the sediment of the beach and erode a prominent scarp along the back of the beach. This may erase the physical and biological sedimentary structures comprising the beaches regenerated during intervals between storms [i.e. during “normal” sedimentation]. 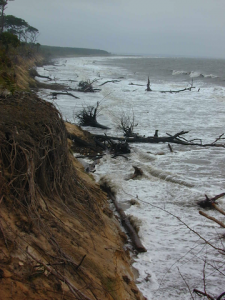 Lying behind the beach may be accretionary dune ridge systems, deposits vegetated by maritime forest, wash-over fans, or marsh meadows. Bluffs are commonly developed along high standing sections of beach, spits, or berms along low areas fronting the marsh meadows. Abundant wash-over and wash-in fans are deposited in low areas by storms occurring during spring tides. Erosive areas that are forested develop prominent areas of skeletal trees on the beach, which are called boneyards.