St. Catherines Island has been inhabited for at least 4000 years. The early history of the Island is still poorly known due to a myriad of factors, which include erosion of some of the archaeological record of that time, no written record of these indigenous people, and limited study of the interval. The status of the current knowledge of the anthropology of St. Catherines has been published (Thomas, et al., 1978) in the Anthropological Papers series of the American Museum of Natural History [from which this account is taken]. 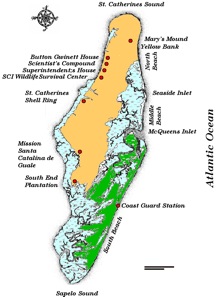 Some of the many historical sites of interest on St. Catherines Island, GA. (approximate scales; 1 mile above and 1 km below).

St. Catherines is thought to have been the site of a large Guale settlement by 1576. By 1587 the Island became the northernmost Spanish outpost on the Atlantic coast and remained so until 1683. In 1576 a revolt of the Guale Indians involved St. Catherines Island as did the subsequent Juanillo rebellion in 1597. The Guale Indians were named by the Spanish from a settlement of that name on St. Catherines Island (Jones In Thomas et al., 1978: 179) and the Spanish mission on St. Catherines has become known as Santa Catalina de Guale. Jesuit, and later, Franciscan, missionaries ministered to the Guales at Santa Catalina de Guale, which was destroyed by fire in 1597 and rebuilt about 1604. In 1680 the British sent a military force down the coast and attacked Santa Catalina de Guale forcing it to be abandoned and later, burned.

About 1725 Mary Musgrove, daughter of a European father and a Creek mother, married John Musgrove and in 1732 they moved to establish a trading post at Yamacraw bluff on the Savannah River. In 1733 General Oglethorpe arrived to establish the colony of Georgia at Savannah. When John Musgrove died in 1735, Mary married Captain Jacob Matthews in 1736. In 1742 Jacob Matthews died, and in 1744 Mary married the Rev. Thomas Bosomworth. In 1748 the Creeks granted much of their land [including St. Catherines Island] to Thomas Bosomworth “and our sister Mary.” In 1758 the Crown obtained a grant of these lands (Ossabaw, St. Catherines, and Sapelo Islands) from the Indians and granted proceeds from the sale of Sapelo and Ossabaw to the Bosomworths to settle previous claims and also granted them St. Catherines Island. The Bosomworths lived on St. Catherines and stocked it with cattle, hogs, and horses and developed it as a plantation. Upon Mary’s death about 1765, Thomas married Mary’s chambermaid. Their remains were all said to be interred in the same area on St. Catherines (Thomas et al., 1978: 217). 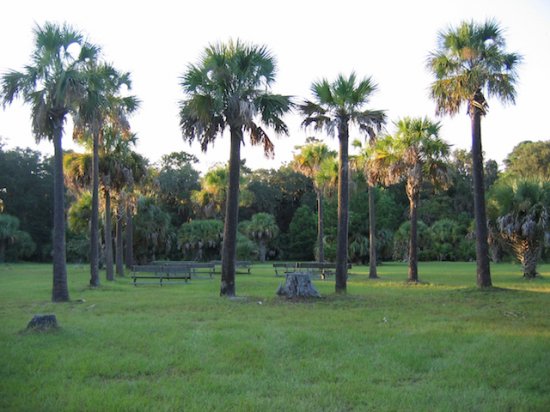 The outline of Mission Santa Catalina de Guale is marked by palm trees, the stump was the front entrance to Georgia’s oldest church 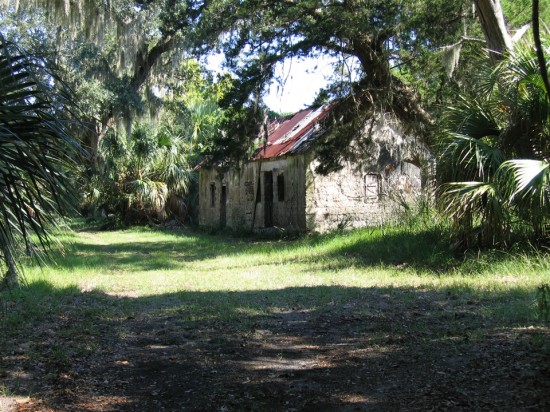 In 1766 the Island was leased by Button Gwinnett and transferred to his creditors in 1773.Gwinnett lived on St. Catherines until his death on May 16, 1777, after a duel with Lachlan McIntosh. He was a signer of the Declaration of Independence and Georgia’s first governor. The house he lived in, The Button Gwinnett House, remains intact on the Island.

The modern Button Gwinnett House was enlarged in 1928-29 and renovated in1971, is thought to enclose the original Gwinnett structure, represented by tabby and motor and tendon construction.

After the Revolutionary War, St. Catherines’ ownership apparently is clouded for approximately 50 years. Jacob Waldburger acquired the north end of the Island in 1800 and the remainder of the Island in 1812, for major production of sea island cotton until the Civil War. St. Catherines and other sea islands were evacuated during the Civil War, with a small population of blacks remaining behind to care for the plantations. After the war, Tunis Campbell established dominion over Ossabaw, St. Catherines, and Sapelo as “governor” of the Freedmen’s Bureau in March 1865, with seat of his dominion on St. Catherines Island where he ruled from the Button Gwinnett House under auspices of Sherman’s Field Order 15 from 1865 until 1867. Another interval of clouded ownership occurred after the war with the Island eventually passing from Rodriguez ownership to Jacob Rauers in 1876. In 1893 a large hurricane swept away a mansion on the south end of St. Catherines. After World War 1, a Captain Oemler married into the Rauers family and established an oyster fishery on the island until the late 1920’s.

In 1929 John Toby Woods moved into Oemler’s house on St. Catherines and the Island was sold by the Rauers to New York investors Coffin, Wilson, and Keys who retained Woods as superintendent. Extensive renovations accomplished between 1929 and 1931, with the raising of the Rauer house and renovation of the Button Gwinnett House and current scientific compound before the Great Depression terminated further development. The Island was then sold to a Mr. Keys who allowed the Island to revert to the Rauers in 1937. During World War II, the Coast Guard maintained submarine observation posts on St. Catherines, one of which was situated on the south side of South Beach Entrance. In 1943 Edward John Noble, a New York businessman, purchased St. Catherines Island from the Rauers and established a Black Angus cattle operation and used the Island for business retreat. Noble died in 1958 and control of St. Catherines Island was vested in the Edward John Noble Foundation in 1968. In the 1960’s superintendent’s duties were passed from John Toby Woods to his son John Toby Woods, Jr. Royce Hayes was appointed Superintendent in 1982, a position he has filled since then. Under his care the facilities have been maintained and enhanced to support the Wildlife Survival Center, an archaeology program of the American Museum of natural History, The St. Catherines Island Sea Turtle Conservation Program, and many scientific, educational, and conservation projects.