Organisms are indicative of the substrate they inhabit. On St. Catherines we see diverse faunas from the marsh, maritime forest, the beach, and the sea bottom. Although all these animals live in discreet assemblages, their shells may be mixed and occur together on the beaches due to the dynamics of the physical environment. There is also a mixing of differently aged faunas due to erosion of older faunas by Recent processes, i.e. ancient marsh faunas are being eroded onto the fore-beach and mixed with beach and subtidal faunas. 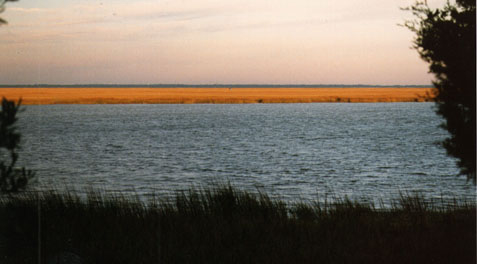 The marsh, the area between the mainland and the barrier islands, is a broad, level plateau covered with Salt Cordgrass and eroded by meandering tidal rivers and creeks. 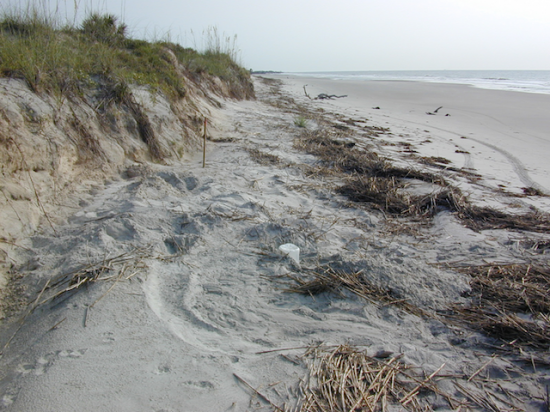 The forebeach, the area between high tide and low tide levels is ~100 m wide, gently sloping seaward, and comprised of firmly packed sand. The lower foreshore merges into the subtidal inner continental shelf. Note line cloud over the north end of South Beach.

Faunas comprising the communities of major habitats are characterized as assemblages described from the most abundant or diagnostic species commonly preserved as body or trace fossils. Over 340 invertebrates are known from habitats St. Catherines Island and are more completely described elsewhere by Prezant, Toll, Rollins, and Chapman, (2002) in Novitates # 3367 and the Ghost Shrimp summarized by Bishop and Bishop (1992) in Novitates # 3042 of the American Museum of Natural History.

In order to develop the concept of organisms being specific to certain habitats, the following sections have been developed: