St. Catherine’s Island consists of two distinct parts, a high-standing, rather level area to the west and northwest and a low-standing, highly textured area to the east and southeast. The high-standing portion of the Island has been mapped as Pleistocene Silver Bluff and the low-standing area as Holocene (Pickering, et al., 1976). The two facies were differentiated on maps (Linsley, 1993; Bishop et al., 2007; Lindsley, et al., 2007) into the Island Core and Accretionary Terrain facies. The island core is characterized by a mature mixed, live oak-hickory-pine forest and former agricultural fields in various degrees of plant succession. The accretionary terrains are characterized by alternating back-beach dune ridge systems and low intervening swales forming either fresh water ponds or tidal creek-marsh meadows. The ridges are forested by various trees that are distinctly distributed along specific ridges and are often dominated by Cabbage Palm, Hickory, Pine, or Live Oak (Coile and Jones, 1988). 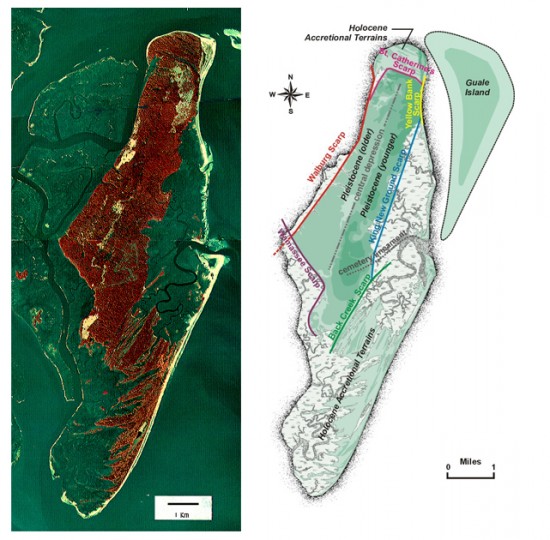 The island core, is attenuated by low-standing accretionary terrains at both ends of the island and along the oceanic eastern margin, forming a prominent 5 m bluff called Yellow Bank along part of North Beach. The eastern margin is otherwise characterized by broad marsh meadows developed behind long sand spits at Seaside Inlet, Middle Beach, and McQueen’s Inlet. The south end of South Beach presents a sequence of approximately 10-12 beach-ridge systems which generally become progressively younger seaward and southeasterly and which can be seen on aerial photographs and orthophotomaps to possess discrete dichotomous boundaries. These packages of sediment represent rapid periods of accretionary activity during the Holocene interspersed with periods of erosional activity giving rise to the sedimentary accretionary terrains, which may be chronologically sequenced from oldest to youngest based using cross-cutting relationships at their boundaries. The pattern of these accretionary terrains conforms to the depositional history of the Holocene part of the barrier island both in their presence and their distribution. Thus the Holocene sedimentary accretional terrains provide a powerful tool to decipher the Holocene history of St. Catherine’s Island as well as the record of sea level fluctuation in the recent past. This in turn allows sedimentologic prediction to be applied to the near future as sea level rises due to global warming. These terrains also provide ample evidence that St. Catherines is a dynamic, rapidly changing barrier island upon whose changing coast sea turtles have been nesting for approximately 18,000 years.

In general, the boundary between the Silver Bluff core facies and the Holocene sedimentary accretionary terrains is demonstrably erosional. At both ends of the island the accretionary terrains stand in marked contrast to the non-textured Pleistocene island core. These erosional boundaries represent surfaces of erosion formed by episodes of erosion due either to eustatic sea level changes and/or lateral migration of subtidal erosional environments such as channels of sounds and meandering tidal rivers. Each erosional event is identifiable in map view by dichotomous beach ridge orientations and often by differences in elevation of adjacent sequences of sediment, and differences in vegetation or archeological age. Each erosional event may be identifiable in stratigraphic sections as an minor unconformable sequence or diastem which dips either seaward or into adjacent areas which had lowered base levels. When such erosional surfaces are included in subsequent erosional events, their former existence and location becomes conjectural once they are destroyed.