St. Catherines Island is geologically dynamic and rapidly changing. Dominant geologic processes include a high tidal range, oceanic waves and currents driven by periodic nor’easters, hurricanes, and other windstorms, and erosion and deposition by meandering tidal creeks and rivers. These processes have resulted in the present Island geomorphology and geography and control the distribution of vegetation and animals on the Island. 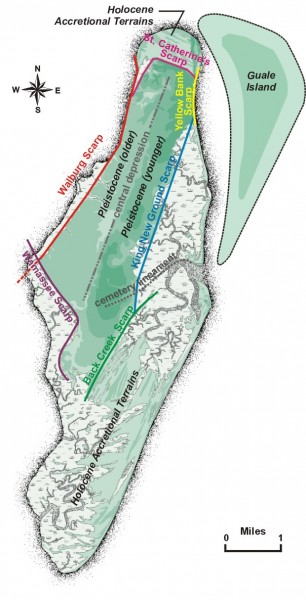 The island core consists of at least two bodies of Pleistocene sand, an older part to the west and a younger part to the east, separated by the central depression, which runs the length of the Island Core. Vibracore transects demonstrate the presence of a profound disconformity surrounding the Island, indicating the Island Core formed more than 48,000 years before present in two stages. 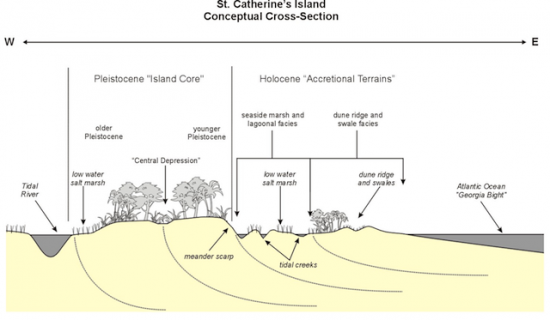 St. Catherines Island consists of wedges of sand welded onto one another and sloping seaward. The higher part of the Island to the west is older than the younger, eastern low-standing part (from Bishop et al, 2007 -constructed by Brian Meyer).

Linear Holocene beach ridge systems built by rapid accretion of beach and construction by winds blowing sand off the wide beaches accumulating it in a series of transverse sand dunes (ridges) stand in marked contrast to the non-textured Pleistocene core at each end of the Island. These boundaries represent surfaces of erosion due to eustatic sea level changes or lateral migration of channels of sounds and meandering tidal rivers. Erosional and depositional events are discernable in map view by dichotomous beach ridge systems, old scarp lines, and by differences in elevation, differences in vegetation, and differences in archeological age. These erosional events may be identifiable in stratigraphic sections as a minor unconformable sequences, or diastems, which generally dip seaward, or into adjacent areas which had lower base levels. 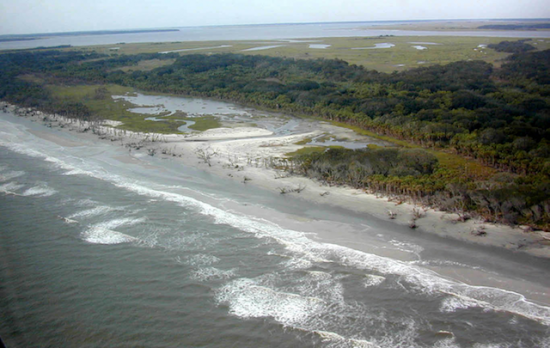 Flag Pond was a swale pond lying behind South Beach until it was breached by a channel eroded during a Nor’easter in March 1993. The pond was flooded by salt water and became Flag Lagoon, which is being progressively filled by sand carried into the lagoon through the Inlet.

Beaches also exhibit evidence of the erosional status of the Island by its profile, the presence of abundant skeletal trees on the beach, by relict muds, relict peats, and relict soil horizons exposed on the beachfront as it retreats due to erosion. This retreat is evident on the seaward side in the form of washover and wash-in fans being deposited across the surface of the Holocene marsh meadows and ridge and swale systems.
Patches of ancient relict mud exposed along the beaches of St. Catherines, such as these studied by Morris and Rollins, 1977 on North Beach, are the erosional edge of marshes that are being overwashed by beach sand forming washover fans covering the marsh as the shoreline erodes westward exposing the underlying marsh on the foreshore. (Modified after Morris and Rollins, 1977, Fig. 6).

Seaside ebb delta is underlain by ancient marsh mud and oyster bioherms covered by a thin veneer of sand. 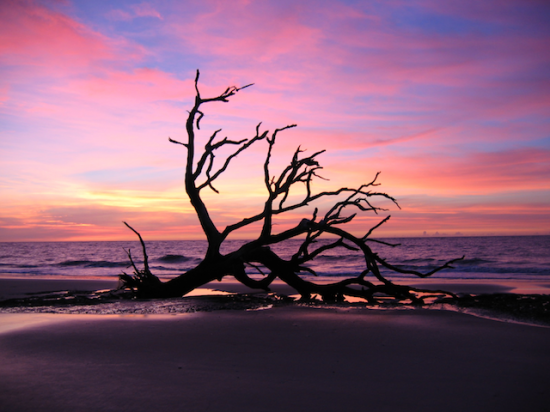 Skeletal trees form “boneyards” along the erosional beaches of St. Catherines. This tree, called “The Fallen Giant,” rests near the north end of South Beach, has toppled over onto the sand veneer overlying exposed relict marsh mud. 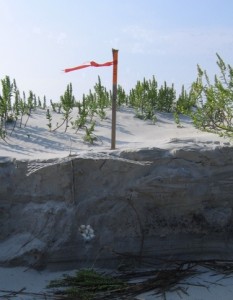 Periodic storms, especially on high stages of spring tides, deeply erode the beach temporarily exposing relict sediments on the eroded beach surface and a steep cliff-like scarp at the back boundary of the beach and forms a deposit of heavy minerals left behind as the less dense quartz sand is removed by breaking waves. As sand is carried back onto the beach during quiescent periods of sedimentation, this relict (or inactive) beach is buried beneath laminated sands of the back-beach, giving rise to the overlying active beach. Superimposed on the interlaminated quartz and heavy mineral sands of the back-beach are sand dunes built by wind sweeping across the broad beaches at low stages of the tide and by some sand slumped or flowing onto the back-beach from steep scarps formed during storm erosion.

Dune fields often form behind ebb deltas, where wind-blown sand is more readily abundant because of the extended width and exposure of the beach at low tide. 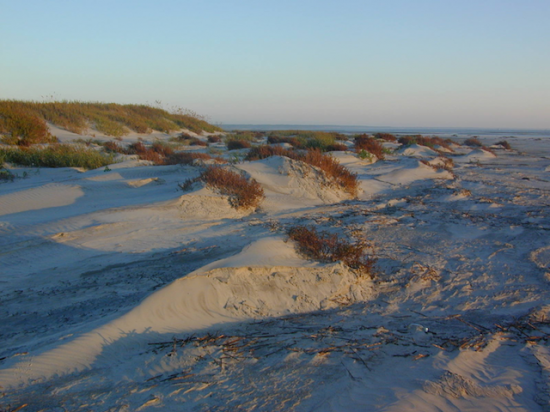 Sand dunes building on the north end of South Beach in wind shadows behind clumps of vegetation forming longitudinal dunes during a nor’easter. Large longitudinal dune ridge in background was built by wind as smaller dunes coalesced forming a prominent wind buffer, building the dune even higher during storms. The type of sediment underlying the active beach may adversely affect nesting because of entrained organics such as roots and shells or by the presence of mud, which in turn controls groundwater conditions.