Scientific process involves the process of doing science. This process varies with the type of science being done, but almost always includes working through one the scientific methods; whether it be the experimental or historical methodology.

The Scientific Methodologies are based upon a standard discovery method consisting of the steps of the Scientific Method(s), however, the entry into the steps may often be at any step as the scientists discovers something out of the ordinary that doesn’t match current knowledge or uses a new technology to re-investigate a problem.

There are three relatively formal scientific methodologies (observational, experimental, and modeling), all are used in the sciences; the experimental methodology is most common in Chemistry and Physics and the historical methodology is most common to Geology, Biology, and Anthropology (Gould, S. J. 1989), and modeling in all sciences. Aspects of each are used in the sciences as a way of discovering natural relationships in our world. The historical scientific methodology has its roots in contingency and the sequencing of events, “one funny thing after another,” events that affect subsequent possible events; controlling the flow of history, that is; of what did happen.

Observation is the effective historical process, coupled with recording the observations and their subsequent analysis. This methodology is a powerful scientific method for deciphering events in the historical sciences. It should be noted, that very often the process of scientific inquiry in the historical sciences involves a process of gathering data, analyzing it for anomaly, and then formulating hypotheses to test the anomaly with further observational data. 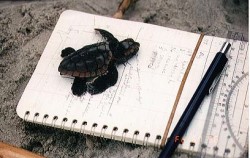 Loose-leaf notes are printed on the computer and used as the basis of the annual notebook. 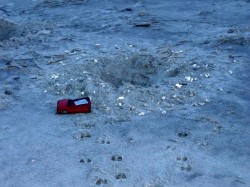 The physical binder for our Master Notebook is a Mead Five Star Zipper Binder.

Sea turtle interns keep a daily observational notebook and are expected to sequentially document all significant events occurring each day. Data from this notebook are transcribed daily into a master Notebook and onto computerized nest forms and spreadsheets to document the development of each nest, which is in turn uploaded to a web-based database. The student’s notebooks, retained by the students, are used to illustrate note-taking techniques in each of their courses and classrooms. 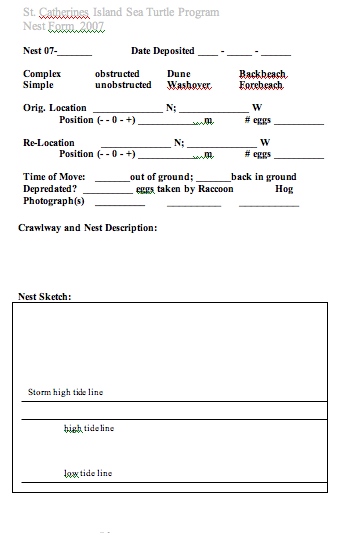 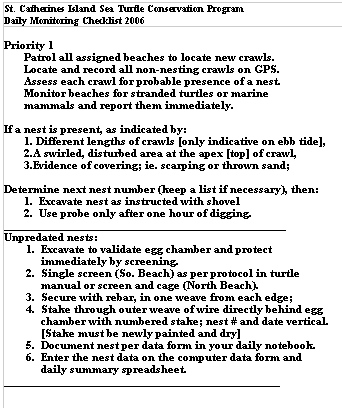 A list of prioritized daily duties is often useful template for the interns and also for the conservationist. 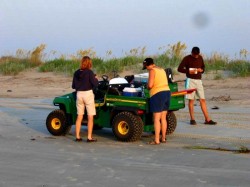 Students gather around their John Deere Gator ATV to catch up on notes, wrap samples, and rehydrate.

The learning strategy used in the GSUSTP@SCI involves preparing the student to enter the field with some level of scientific knowledge in place, demonstrating conservation and documentation processes in the field, empowering the teacher-interns to apply hands-on inquiry and critical thinking skills to locating clutches of eggs and their documentation and conservation, mentoring by colleagues through these processes, and developing mechanisms for students to carry this information back to their students. This experiential process builds confidence and self-esteem in student participants and allows them to develop teaching materials that promote their position in their classes, with colleagues, students, and administrators. The practicing of the scientific method, scientific processing skills, accumulation of material for teaching, and networking with teacher-colleagues is enhanced as teacher-interns become more familiar with utilization of emerging electronic technologies on a daily basis.