Stranded live animals are immediately reported to GaDNR to await their response and kept wet and as comfortable as is possible. Dead stranded animals are documented (location, species, size, injury, photographed) then marked with paint (so they won’t be counted again) and pulled off the beach. Fresh dead animals are necropsied and may be buried in the sand dunes to recover osteological materials for museums (this requires a Federal and State permit).

Every dead sea turtle, whale, or dolphin is counted and documented, then removed from the ocean or secured to prevent its washing out to sea with the receding tide. Strandings are documented in the field by identifying it to species and gender, measuring its dimensions, documenting visible wounds and injuries, degree of decomposition, and performing a field necropsy to determine probable cause of death. The Sea Turtle Stranding and Salvage Network accumulates reports of this data and acts as a clearinghouse for information.

GaDNR administrates the STS&SN program in Georgia and provides support in reporting stranded marine reptiles and mammals. Dead animals are located with GPS, measured, checked for tags, and documented with digital photography, and must have a report filed within 24 hours. Dead animals are marked with paint, sampled for various tissues studies, and pulled off the beach so they are not counted again. When a large number of strandings occur, GaDNR and the USF&WS have rules allowing suspense of coastal fishing (a closure) for an interval of time. 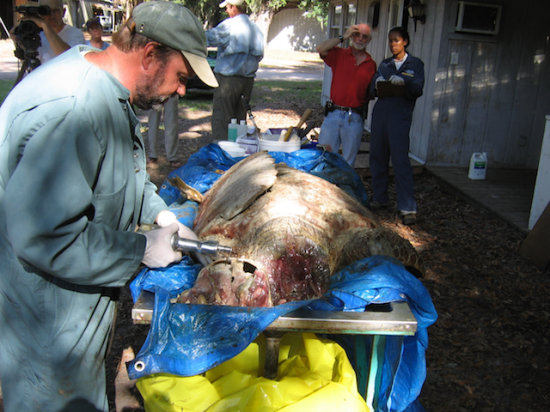 St. Catherines Island Survival Center veterinarian, Dr. Terry Norton, performs a necropsy on a dead Loggerhead in 2006 to determine cause of death.

Live stranded reptiles or mammals are reported immediately, supported in the field to sustain life, while GaDNR responds a rescue assessment team as soon as is possible. Viable animals are taken to regional rehabilitation facilities, such as the Georgia Sea Turtle Center at Jekyll Island or Sea World. Animals not viable are euthanized and necropsied as part of baseline health assessment of sea turtles. 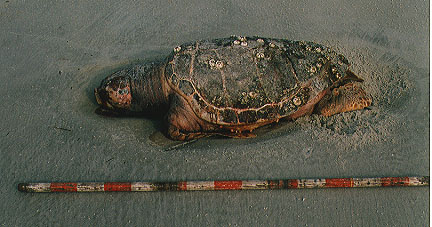 Stranded sea turtles on St. Catherines Island may be salvaged for skeletal studies in various museums. The turtle is moved into an appropriate area off the beach and buried in a shallow excavation dug into the sand dunes, screened to keep scavengers out, and marked. After approximately one year, the skeleton is exhumed by paleontological methods, carefully digging with small shovels, trowels, and brushes to recover the skeleton. This methodology also allows taphonomic information of preservation of sea turtles to be gathered (Knell, 2005). We often bury our stranded turtles in, or on, nylon bags to help recover all the bones when it is dug up. 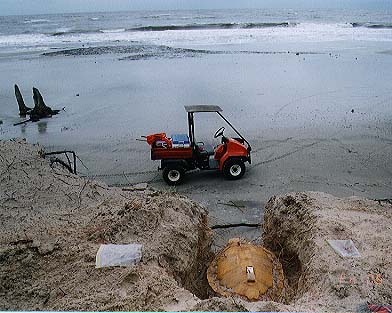 Juvenile loggerhead (9409121) exhumed 9/06/95 after being buried for a year. The skeleton is on the brink of a 4 meter storm scarp. When the turtle was buried in 1994 the scarp was positioned near the double stump to left of Mule, marking approximately 16.75 m (55 feet) of beach erosion in the interval of one year. 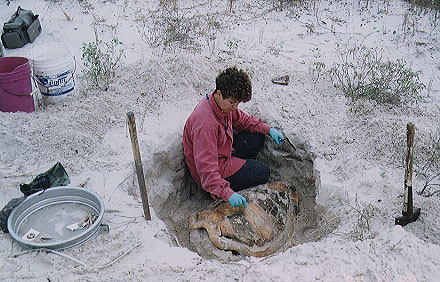 Nancy excavating loggerhead sea turtle skeleton in 1994 that had been buried nine months earlier. Beneath this carapace we found a pool of decomposition products that had not yet completely decomposed. Notice the precaution of latex gloves to maintain a bacteria barrier for the scientist.