Relocation management criteria have been established for the Island and areas with historically low potential have been identified. An annual Rapid Habitat Analysis is performed to follow longitudinal changes in habitat hatching potential. Nests deposited in areas with low probability of success are relocated to areas with higher probability and placed in new, egg chambers dug with a post-hole digger, then covered and marked as in situ nests.

Management criteria can be established to trigger moving nests to more favorable habitat if it is located in previously unsuccessful stretches of beach, is in jeopardy from ground water inundation, is placed too far out on the beach, or is situated in a highly erosive portion of beach. These criteria have been established with experience and by analysis of success of nests from previous seasons.

St. Catherines Nest-Moving Criteria (1998 as modified to 1999 conditions) were established during 1997, modified in 1998, and modified again in 1999 (Bishop and Marsh, 1999). This island specific nest moving management plan was designed to alleviate negative habitat impacts on loggerhead sea turtle nesting success on St. Catherines Island. A similar plan is envisioned for each of the Georgia barrier islands and is presented here as a model which might be applicable to other islands and their specific complement of habitats. 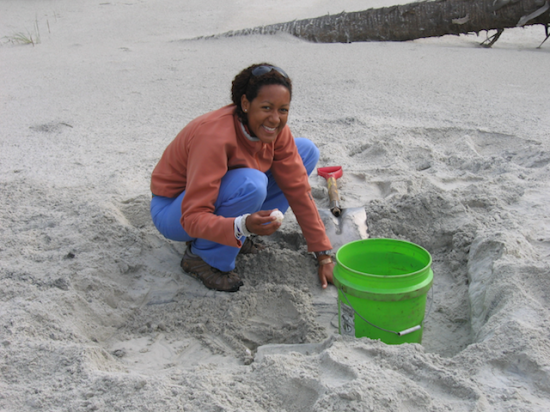 Sea turtle Intern Hollis has located a clutch of eggs by carefully digging with a shovel. This nest [06-022] was situated on the back of the forebeach and had to be moved. 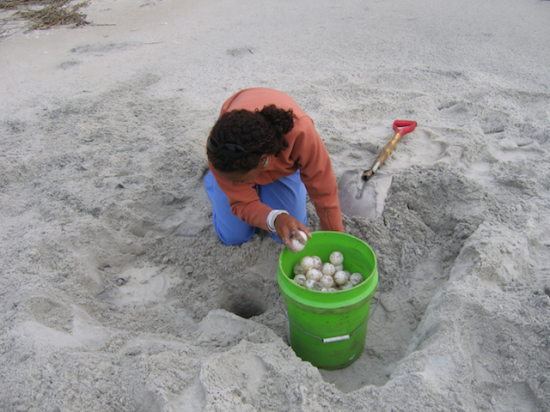 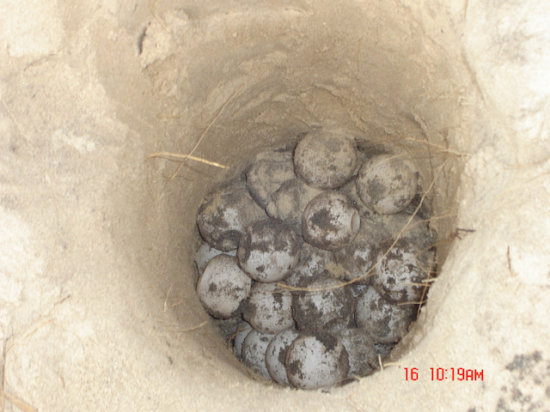 A new egg chamber is dug for the clutch in a nuturery, where the nest will likely hatch, and eggs are carefully transferred two by two into the new egg chamber. (Photograph courtesy of Tracy Burke).

On St. Catherines Island we have developed the following protocols for loggerhead sea turtle nest relocation:

A nest must be moved if at all possible if it:

Was deposited along the margin of St. Catherines Sound. (erosional)

Was deposited on South Beach between 2.3 and 4.0 km  (seaward of Flag Pond)

Was deposited on South Beach between 6.0 and 8.9 km  (washover fans)

Was deposited more than 12 days ago.

A nest should be considered for moving if it:

A. Remove from nest one or two at a time.

B. Place on sand layer in bottom of bucket; one or two at a time.

C. Count out of egg chamber and into bucket (when working in pairs).

D. Insulate eggs against temperature change by covering with sand or towel, keep in shade.

E. Ride eggs as low as possible on machine (Foot floor if possible).

F. Place one or two at a time into new egg chamber.

A. Behind Storm high tide line.

B. Slope of surface toward sea. 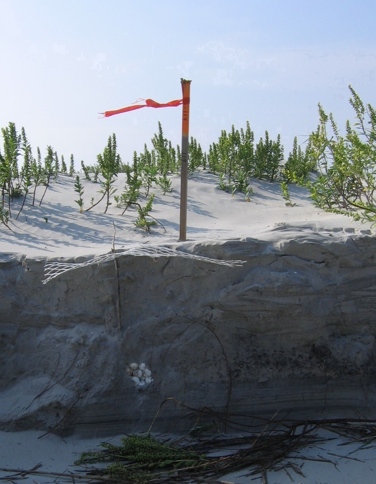 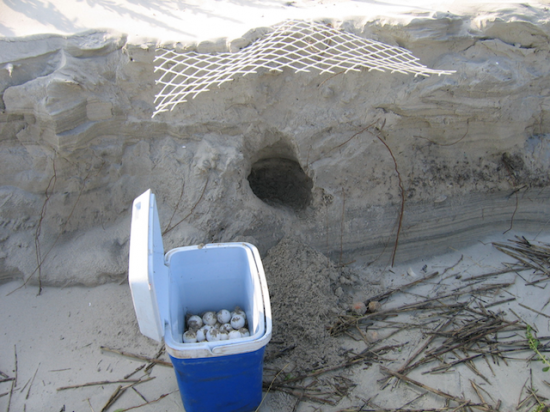 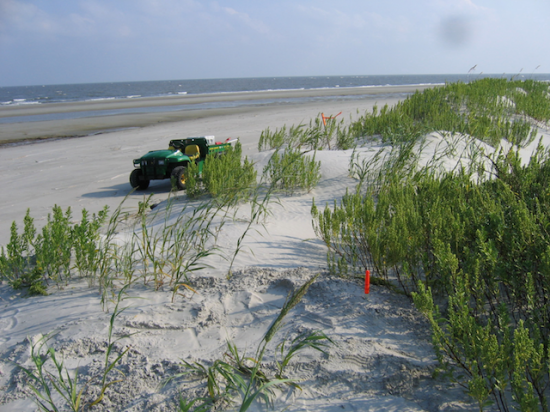 Nests that are moved must be moved carefully, within 12 hours of deposition. The new nest is hand-dug or dug with a post-hole digger to conform in size and shape to a typical loggerhead sea turtle nest and is redocumented like any other nest, covered with screen(s), and marked with a stake.

Once relocated each nest is monitored on a daily basis.