Non-nesting crawlways and new nests are located with GPS to within a three meter circle of precision and plotted daily on a GaDNR spreadsheet, on a Nest Monitoring List, and daily effort is recorded as time spent monitoring and percentage of beach monitored. Interesting nests are measured, sketched, and photographed and documented in a loose-leaf notebook with pages produced as a daily template. Stranded sea turtles and marine mammals are observed, documented, and reported to GaDNR.

Once the nest is validated by locating a clutch of eggs, relocated if necessary, and properly backfilled, it must be protected from predation by standard predator control procedures and be properly located on the beach.

Conservation of nests consists of covering the egg chamber with a 2 x 2 inch mesh plastic screen centered exactly over the egg chamber, attaching the screen by burying or staking with plastic stakes and marking the nest with a wooden stake located a specific distance and direction from the nest. In areas especially susceptible to raccoon predation a cage constructed of wire mesh is set on top of the plastic screen to prevent raccoons from reaching through the screen to grab a quick meal. The screen is often covered with two to three inches of sand to hide its position from curious raccoons, pigs, and people. 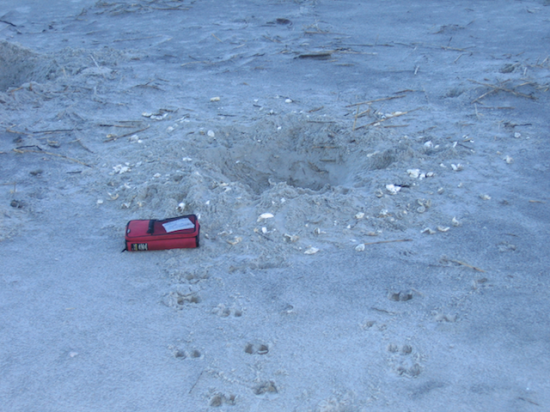 Depredation by feral hogs usually results in a bomb-like crater with a raised rim, rooted to the bottom leaving no eggs behind. Hogs invariably return the next night (hoping for a second large meal?). Note that this hog only left his/her footprints! 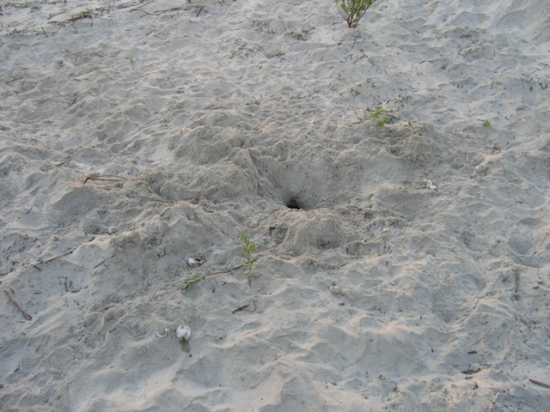 Depredation by raccoons usually consists of attack from the top by sharpley-clawed front feet, digging through the loose sand of the covering pit until the egg chamber neck is hit, and followed downward. Many eggs are slit in the attempted removal, and the egg chamber washed in albumin.

Management is done to limit depredation to 15% or less. Major predators include ghost crabs, raccoons, and feral hogs. Nests are protected by being screened and covered with sand as a first line of defense. If relocated the eggs are placed well beneath the surface so the top eggs are about 30 cm deep. When repeatedly attacked by raccoons, nests are covered with a wire mesh cage to make additional space between the eggs and the predator. Repeated raccoon attacks are answered by trapping with Haveahart live traps and by limited hunting. Hog depredation can occur at any time because some hogs forage on the beach and happen to learn egg depredation behavior or are inveterate rooters.

Once hogs discover eggs in the beach, they rapidly exploit the resource and act as “depredation bombs” cratering the beach with rooted nests (Hayes, et al., 1995). The most effective response to hog depredation is hunting the offending hog by ambush on the night succeeding the depredation, when hogs invariably return for a second meal. This technique has been successfully used for over a decade on St. Catherines Island, along with management of overall hog populations, allowing beach hogs and sea turtles to coexist most seasons. There is a positive feedback system in egg predation; nests opened by ghost crabs apparently provide scent clues to raccoons, whose inept egg handling skills cut and break most eggs, often attracting the attention of feral hogs. Opening a clutch also allows access by insects and airborne fungi, often destroying many eggs. Daily monitoring allows a close watch on conditions of each nest and rapid remediation solves many problems. 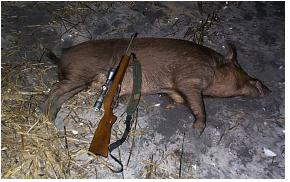 Depredating hogs are normally ambushed and shot on the night following their depredation at the site of the depredated nest. 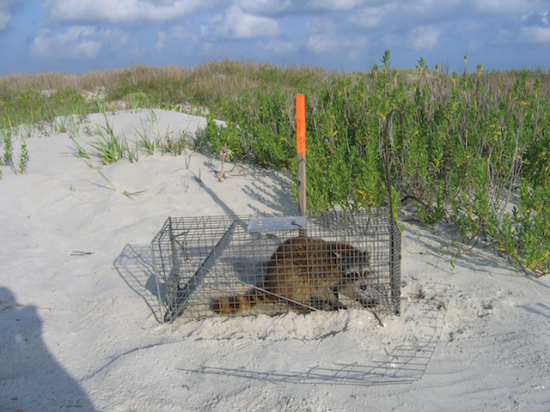 Raccoons, the wily buggers, must normally be trapped along their foraging runs, including nests they, or their family, formerly depredated (i.e. Nest [06-010a].