Three to five days after the last emergence nests are excavated by hand, digging vertically downward to the egg mass and separated into unhatched and hatched eggs. Hatched eggs shells are counted into sets of 10; only whole egg shells, or egg shells representing 50% or more of an egg, are counted (50% rule of GaDNR). The unhatched eggs are checked for viability by holding and gently squeezing to feel for movement. Data are recorded in the notebook, entered onto the spreadsheet and monitoring list as counted. Numbers are then resolved on St. Catherines counts to reflect real numbers of eggs and hatchlings into the sea.

Egg shells and bad eggs are accumulated into an egg bucket and buried on the Island well away from the beaches. Empty egg chambers are backfilled with sand and often recovered with the screen to allow odors to dissipate and surface disturbance to disappear. Screens are then removed and placed into storage or reused for new nests. Stakes are left in place until most nests have been assessed.

The success of each nest is assessed after final emergence of the hatchlings or after the nest should have emerged. Hatchlings usually emerge after approximately 50 to 60 days (range 42 to 80 days) during the night. Emergence may be a single event or may involve up to eight successive emergences by small groups of hatchlings. With no emergence for three successive nights, evidence of a single major emergence, or onset of detrimental conditions a nest will be assessed by excavation. Occasionally we are intrigued by specific conditions and we will trench a nest to examine it more closely.

Emergences are indicated by emergence craters marking the emergence of hatchlings exiting the sandy nest and by tiny hatchling crawlways made by the turtles scampering toward the sea. Because of the point origin of the hatchlings, the crawlways often overlap one another and crisscross. The number of crawlways is counted and recorded to estimate the size of the emergence; if crawlways overlap we multiply our count by two. 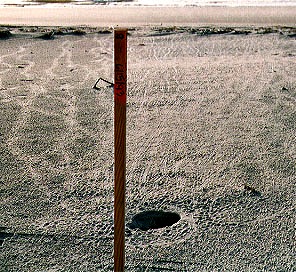 Emergence crater and hatchling crawlways of St. Catherines Nest [93-020] after a nighttime emergence. Because the crawlways anatomize, crossing over one another, we commonly count as many crawlways as we can and multiply by two to estimate the size of a major emergence like this.

To assess a nest the protective screen is lifted off the nest and secured. The egg chamber is located by digging a small tunnel vertically at the center of the screened area. Careful digging is necessary because there may be stragglers in the nest, hatchlings that are too young, or to small, to dig their way out of the sand with their sibling turtles. Stragglers are kept in an insulated cooler and released the same night to replicate an emergence. 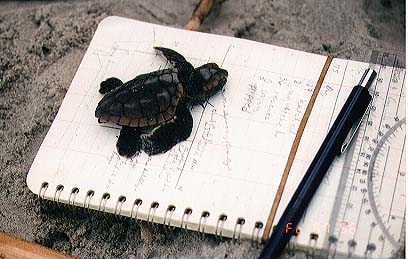 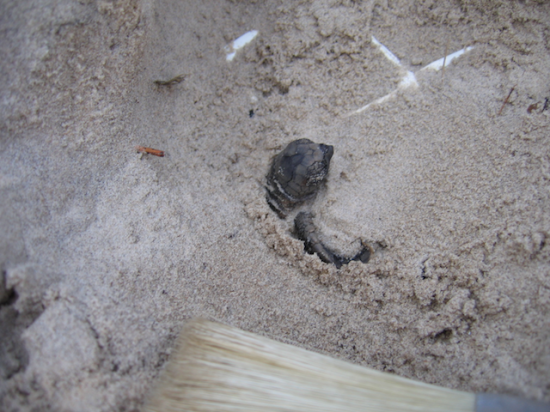 When a nest emerges we always check the screen to be sure no turtles are hung-up in it. This hatchling was found hung-up in a plastic screen in Nest [06-099] and carefully removed and released.

As the nest is excavated, unhatched eggs and egg shells are removed and sorted, any remaining viable eggs and stragglers are taken out of the nest and placed back in the egg chamber or in a cooler. Eggs and egg shells are sorted, then accumulated in piles of 10. Sets of 10 expedite and simplify the counting of hatched and unhatched eggs, which are recorded in the notebook and added together to determine the total number of eggs in the clutch, the number of hatched eggs divided by the total number of eggs times 100 computes the percent success of the nest. These respective numbers are recorded in our field notebooks, with each observer taking his/her own observations and notes. Depth from the beach surface to the bottom of the nest is measured and any other significant observations recorded in the field notebook. Eggs, egg shells, and dead hatchlings are placed in an egg bucket and disposed of in dead egg pit dug on the island. The egg chamber is backfilled with sand previously dug out from the nest. Nests may be rescreened for several days to keep predators out of the inactive nests while sand settles and odor dissipates. 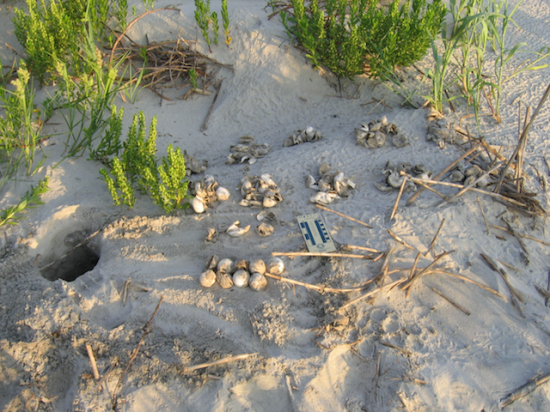 Assessment of hatching success is done by carefully excavating the nest by digging straight down the egg chamber neck, removing all egg shells, sorting them into hatched eggs and unhatched eggs, then counting them into piles (sets) of 10. In this case we counted 102 hatched and 9 unhatched eggs for a total of 111 eggs in the clutch and a hatch rate of (102/111) x 100 = 91.89 % … an excellent hatch for a wild nest [06-124w]!