Once hatched, baby sea turtles must exit from the nest, scamper across a beach populated by hungry raccoon, Ghost Crabs, and feral hogs. In the ocean, hatchlings enter a swimming frenzy for approximately 72 hours, apparently in a dispersal mode to thwart predation by shore birds, fish, and other potential predators. Estimates of the numbers of hatchlings necessary to produce a single adult sea turtle capable of reproduction at 20 to 30 years of age range from 1,000 to 10,000. 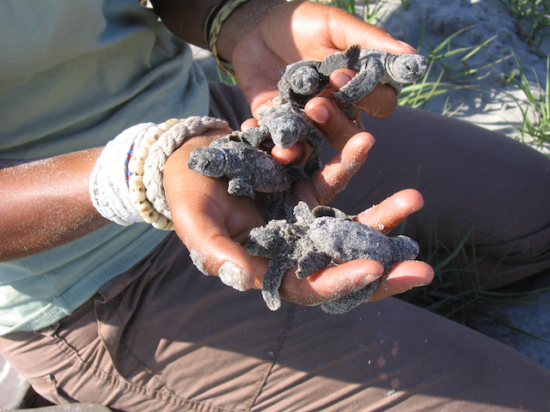 Scientists estimate one in a thousand of these baby Loggerhead sea turtles will survive to reproductive age! Is the lucky one in this picture? (Nest [06-001]).

We prefer the lower estimate, one reproductive adult sea turtle for every 1,000 hatchlings making it into the ocean. If this estimate is accurate, one can compute the number of adult sea turtles produced by each season’s work. From this total one can subtract the number of dead sea turtles found on an Island’s beaches in a given year. Subtracting the estimated number being removed from the number being produced each year gives an idea of the overall success of the sea turtle conservation movement in our region.

Compute those numbers for yourself and predict the status of sea turtles in Georgia in the future.

The pattern of decline is readily apparent in these data. The decline of the sea turtles is a worldwide phenomenon as has been documented in The National Academy of Science publication, “Decline of the Sea Turtles.”

It is this real-world problem that forms the basis for The St. Catherines Sea Turtle Conservation Program and our resultant Science Education Program.