The St. Catherines Sea Turtle Conservation Program developed a concept for a portable sea turtle exhibit about 1994 and funded by a grant from The Georgia Plan for Mathematics and Science Education. The exhibit was intended for use in school classrooms and media centers in Georgia. The exhibit was designed by Gale Bishop and executed by Wilderness Graphics (Tallahassee FL) as a folding, box-like format, with folded dimensions of 5 feet x 3 feet x 3 feet, unfolding to ten feet of length and six feet of height at its center. The exhibit, designed for portability, weighed under 200 pounds and could be moved by two to four people, but presented significant problems due to its bulk and weight. Two iterations of the exhibit were produced, one was housed as a temporary exhibit at the Georgia Southern College Museum (Statesboro, GA) and the other was used as the traveling exhibit from 1995 to 2003 visiting many classrooms around the State of Georgia. The traveling exhibit found a temporary home at the Jekyll Island Marine Education Center for several years, then was returned to St. Catherines Island for use in the Sea Turtle program until 2006 when components were disassembled for integration into exhibits at the Fernbank Museum in Atlanta, GA. Components posted on text boards in the exhibit were preserved, revised, and are posted on The St. Catherines Sea Turtle Conservation web site as a down loadable bulletin board “poster.’ 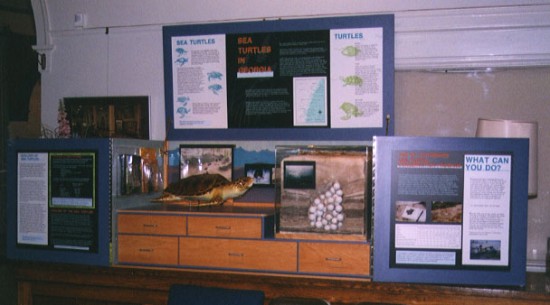 The St. Catherines Sea Turtle Exhibit unfolded and on display.

The sea turtle exhibit was loaned for classroom use for up to two weeks on a priority basis in the following order; former sea turtle interns, administrative or promotional uses, then other science classes.