The Goals of the St. Catherines Sea Turtle Program are to:

For the past 23 years, the Program’s mission has been to enhance production of loggerhead hatchlings to build a sustainable population of sea turtles in the Southeast. This has been accomplished by following the procedures outlined in NOAA and the U.S. Fish and Wildlife Services’ “Recovery Plan for the Northwest Atlantic Population of the Loggerhead Sea Turtle” (second revision). The Recovery Plan identifies three objectives that the Georgia Southern University Sea Turtle Program at SCI fulfills every season:

Over the past 23 years, the Georgia Southern University Sea Turtle Program at SCI has put over 170,000 hatchlings into the sea from over 3000 nests. 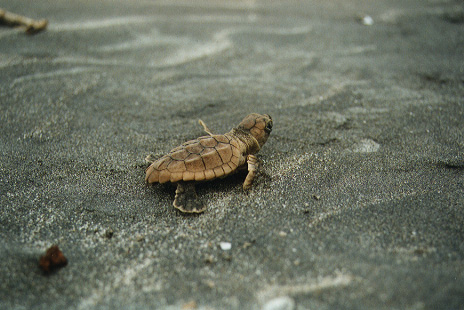 More About The Sea Turtles We are Saving:

Seven species of sea turtles currently inhabit the World’s oceans; all are threatened or endangered; four are found in the coastal waters of the Georgia Bight:

Sea turtles exhibit adaptation to a totally marine existence, except for depositing their eggs on land. Legs are modified to flippers, heads and necks are no longer retractable, and salt glands allow excretion of salt from their systems. Of the four Georgia species, only loggerheads commonly nest on sandy shores of Georgia’s barrier islands. Sea turtles evolved approximately 150 to 110 million years ago (Kear and Lee, 2006) during the latest Jurassic or early Cretaceous Period. During this time many species have been found in the seas at any given time. As time passed, many species of sea turtles evolved and adapted to the changing environment, and some species have become extinct. Confronted with the exploding population of humans and their ever increasing pollution, sea turtles have become threatened and endangered; not a new phenomenon for individual species throughout geologic time, but unique due to involvement of all sea turtles and due to their interactions with humans.