Physics and Astronomy
College of Science and Mathematics
Home > News

The Georgia Southern University Planetarium is an immersive astronomy laboratory housed in the Department of Physics and Astronomy, within the College of Science and Mathematics. It is used to teach university courses and labs daily, as well as an independent study planetarium course for university students. 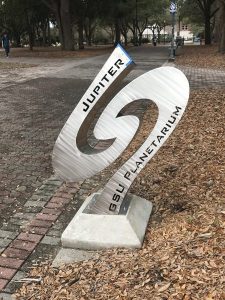 Check out this press release from the Georgia Southern University Newsroom in reference to the Solar System Walk!

The Ataama Large Millimeter Array (ALMA) is an interferometer array operating at millimeter and sub-millimeter wavelengths. Located high in the Chilean Andes. 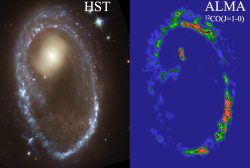 HST color images of ring galaxies AM 0644-741 and Arp 147 currently being observed with ALMA. Right picture shows fresh carbon monoxide in the ring.

Galaxies – once considered to be isolated “Island Universes” – actually experience collisions and close passages with their neighbors. Such events can drastically change both a galaxy’s appearance and rate at which it forms new stars.

One of the rarest and most dramatic examples of this are ring galaxies, created when a neighbor galaxy passes through the center of a larger “target” galaxy. The collision causes gas and stars in the target galaxy to accumulate into dense rings that travel outward at high speed. A prime example is the galaxy named AM0644-741, shown imaged in visible light by the Hubble Space Telescope in the displayed figure (left). The ring’s blue color indicates that it is robustly forming stars. Georgia Southern Professors James & Sarah Higdon are studying how stars form out of the gas swept up in the rings, and if this is different from the way ordinary galaxies do it. Stars form in dense and cold clouds of molecular gas (mainly hydrogen), so to study star formation they must measure its quantity and distribution.

They were recently awarded observing time with the Atacama Large Millimeter Array (ALMA), a collection of 66 separate radio telescopes located on the high Atacama plains in Chile. These telescopes work together to produce sensitive high resolution images of light emitted by molecules in distant galaxies. The panel at right shows that cold molecular gas is heavily concentrated in AM0644-741’s ring. Together with other data James and Sarah hope to learn if stars form with greater efficiency or more rapidly in the rings of these objects. Their work shows that 130-million years ago, in the middle of the dinosaur’s reign on Earth, a neighboring galaxy crashed through the center of a normal spiral galaxy, creating the ring we now observe moving outward at 340,000 mph and forming stars roughly 10-times faster than our own Milky Way galaxy.

Dr. Mark Edwards was chosen by the National Science Foundation (NSF) to participate
in the “Ideas Lab: Measuring ‘Big G’ Challenge” held this past July 18-22, 2016
at the National Institute of Standards and Technology (NIST) in Gaithersburg, MD.
The purpose of this event was to bring a group of scientists together to brainstorm
new ideas for measuring Newton’s Universal Gravitational Constant also known as
“Big G”.

In the 1600s, Sir Isaac Newton discovered the “law of gravity” which states that
the gravitational force between two objects is proportional to the product of their
masses divided by the square of the distance between them. Big G is the constant
of proportionality that relates these two quantities and is a fundamental constant
of nature.

The first quantitative measurement of Big G was made in the late 1700s by Henry
Cavendish and many more measurements of Big G have been made since then.  Even after
200 years, Big G remains the mostly poorly measured fundamental constant of nature.
Some of the measurement made in the last 10-15 years have actually made the uncertainty
in the value of Big G increase.  This situation has provided the motivation for the
ideas lab.

At the ideas lab Edwards presented an idea for measuring Big G aboard the International
Space Station (ISS).  In 2017, the National Aeronautics and Space Administration (NASA)
plans to deploy a new experiment to the ISS called the Cold Atom Laboratory (CAL).
This experiment will be capable of creating ultra-cold atomic gases that have been
cooled into a state called a Bose-Einstein condensate (BEC).  When the gas is in the
BEC state, it can be split in two and separated in the microgravity environment of the
ISS.  When this is done with a large source mass present, the source mass pulls
gravitationally on the two BEC pieces differently and this difference can be measured
if the two pieces are put back together.

Dr. Edwards is working on refinements to the design of this proposed experiment.  He is
collaborating with Dr. Doga Murat Kurkcuoglu, a professor in the Physics Department at
Georgia Southern and a physics major, Ms. Elizabeth Ashwood and with Dr. Charles W.
Clark of the Joint Quantum Institute (JQI).  The JQI is run jointly by NIST and the
University of Maryland at College Park.

More information about the Ideas Lab: Measuring ‘Big G’ Challenge can be found at