Why Major in Math?

Dr. Jimmy Dillies discusses what you can do with a degree in Mathematics from Georgia Southern University. 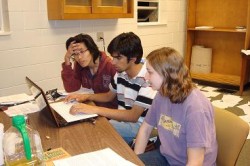 The Mathematical Contest in Modeling (MCM) is another prestigious mathematical competition organized by a well known private company COMAP (Consortium for Mathematics and its Applications) whose main goal is to promote quality math education.

MCM is a team competition. Teams of up to three students from each university (each university can have up to four teams) are working on one of the two offered real world problems. The problems are open-ended and the teams have to submit their reports at the end of the competition which then get judged by the team of judges. The ranking of the teams falls in one of the following categories: