Patricia Humphrey, Georgia Southern University Professor Emerita of Statistics, received the 2018 Mathematical Association of America Southeastern Section (MAASE) Distinguished Service Award, which was announced at the 97th Annual MAASE Meeting at Clemson University on March 23, 2018.  Humphrey has a remarkable record of service to the mathematical sciences community.  Within the MAASE, she has served as Chair, Past-Chair, Chair-Elect, Program Chair, and Section NExT (New Experiences in Teaching) Coordinator.  In addition, she organized and hosted the 86th Annual MAASE Meeting in 2007 at Georgia Southern University, served as MAA Liaison, and advised the MAA Student Chapter.  In addition, she organized the Eagle Undergraduate Mathematics Conference at Georgia Southern in 2010, 2012 and 2014, which also included the MAA State Luncheon.  Humphrey made numerous contributions to the profession at the national level as well.  She served as Chair and Newsletter Editor of the MAA Statistics Education Special Interest Group, was a member of the MAA – American Statistical Association Joint Committee on Statistics Education and the MAA Dolciani Committee.  Over her career, Humphrey gave approximately 30 presentations at national and regional meetings and organized numerous special sessions.  Her extensive service contributions were also recognized with the College of Science and Technology Award for Excellence in Service in 2011 and the University Award for Excellence in Service in 2012. 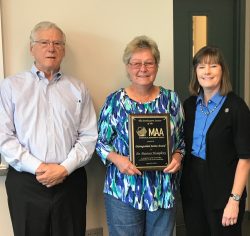