If you’ve been on campus recently, you’ve certainly noticed the new metal sculptures, engraved with the names of planets, along the Pedestrium and other locations.

The sculptures are part of a collaboration between the Georgia Southern Planetarium and the Betty Foy Sanders Department of Art called the Solar System Walk. The Solar Walk essentially turns the University campus into a microcosm of our solar system. Using each planet’s distance from the Sun, designers placed campus markers a relative distance from the Planetarium.

The inner planets, including Mercury, Venus, Earth and Mars, are located in the Math/Physics Building courtyard, while the outer planets, including Jupiter, Saturn, Uranus and Neptune, are placed along the Pedestrium, from the Russell Union to the College of Education. 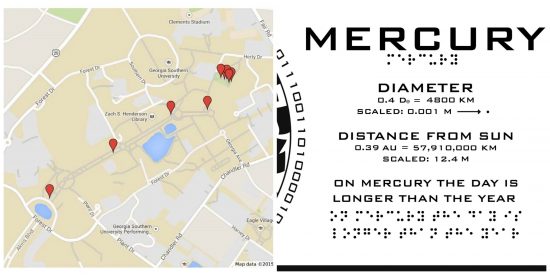 “The Solar Walk will give students a sense of the scale of our solar system, impressing upon them its vast expanse and emptiness,” said Clayton Heller, Ph.D., Planetarium director. “It will promote K-12 STEM education as it is to be integrated into the Planetarium’s outside activities, and will be an incentive for kids to return to campus to complete their “passports” and discover the campus with their parents.”

Each 4-foot sculpture is fabricated in stainless steel and powered with different colored solar-powered LED lights, and will soon have rubbing plates containing general planet information, the planet’s image and a binary code etched into them. Participants in the Solar Walk can pick up a solar system “passport” from the Planetarium and use it to record the codes on each sculpture, representing how the spacecrafts that explore our solar system communicate.

Once the passport is filled in, it can then be decoded into standard text by using a table at the back of the booklet. A GPS location will be given to a final marker: a comet. Using the decoded location and a smartphone, the participant will visit the comet and add the final rubbing to their booklet. Bringing the completed booklet to the Planetarium awards the participant with a prize.

The Solar Walk installation is the result of a 10-year collaboration between the Planetarium and the Department of Art, and was a difficult journey. 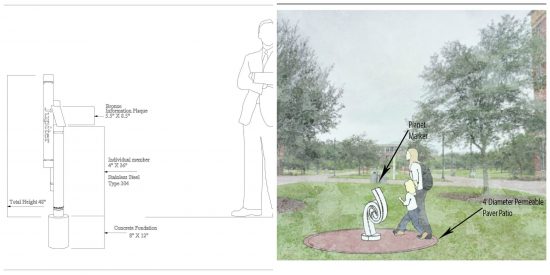 For years, the Solar Walk flew under the radar, but in 2014, the Georgia Space Grant Consortium awarded $6,000 to fund the project. Just one year later, undergraduate art student Stuart Goodall was hired to create a new sculpture design, and former University President Brooks Keel, Ph.D., donated $3,800 from the president’s fund to begin construction. 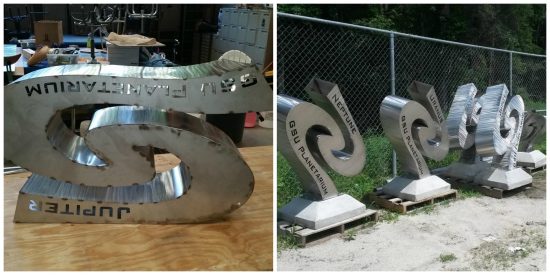 “Combining art and science is something I have always done,” said Underwood. Part of the reason I love this project so much is because it combines both successfully and gives kids a way to wrap their heads around the solar system. I feel like if science and art were combined more often, both would be easier for kids to understand and get excited about!”

In December 2016, the markers were finally installed on campus.

“It has been a long road to get to this point and very exciting to see the markers being placed across campus,” added Heller. “I am particularly looking forward to the addition of the rubbing plates to the sculptures, transforming them into functional art which our young visitors can touch and learn from.” 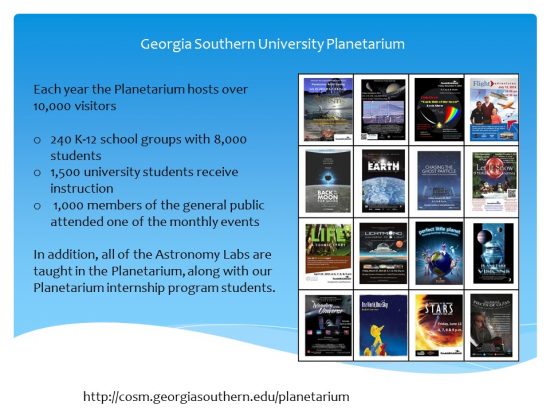