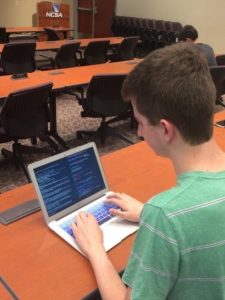 Last spring, Physics Major Reed Hodges received a prestigious NSF-funded Blue Waters Student Internship, which included spending two-weeks at the Petascale Institute, at the National Center for Supercomputing Applications at the University of Illinois in Urbana-Champaign in May 2016.

This year-long internship is hosted by Dr. Durach’s group at Georgia Southern University. The work on the project involves two stages: (a) development of Mie theory codes, which will allow calculation of electromagnetic fields and scattering properties of spherical particles. (b) consideration of spherical particles coupled to planar interfaces and calculation of electromagnetic fields in such structures.

The first part of the project is complete. Mie theory codes were developed in Mathematica and Fortran and tested on metamaterial metal-dielectric spheres, for which fields and cross-sections can be calculated for arbitrary metal fractions from pure dielectric to pure metal reproducing results from the literature.

As an extremely pleasant and important by-product of this part of the project it was established that wavelength-scale metamaterial spheres with metal fractions ~5% exhibit invisibility. Previous work on invisibility invariably separated invisible objects into hidden and cloaking sections. In the invisibility scheme which we propose it is not possible to determine what is cloak, since the object is a homogeneous sphere. Therefore our work opens up an important research direction in optics – invisibility without cloaking and demonstrates that this approach is possible in principle. The corresponding manuscript is written and is currently in the editing phase and soon will be submitted to a high-impact peer-refereed journal and to arxiv. 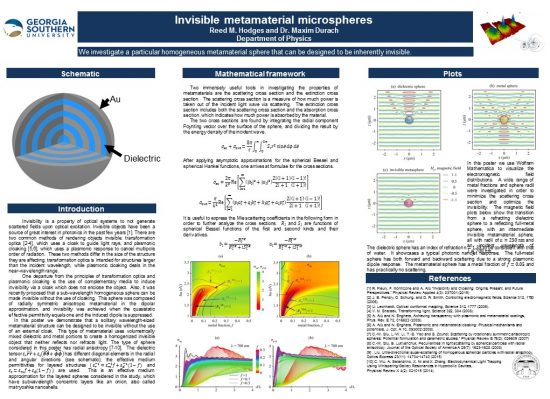 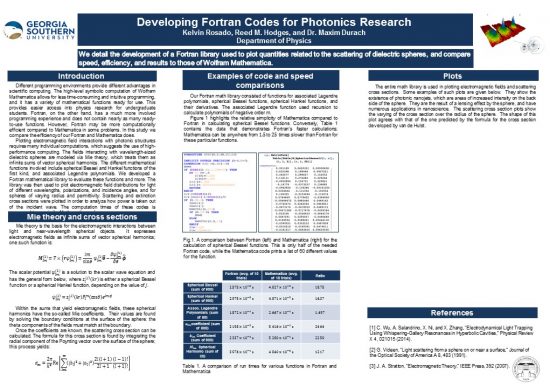 This work was submitted to Georgia Undergraduate Research Conference in Milledgeville, GA in the form of two posters (posters 1 and 2), in which the invisibility mechanism was described and the work in Mathematica and Fortran programming environments was compared. Both posters were accepted and one received an outstanding review, suggesting that the work should be presented as a talk. Reed Hodges and his collaborator Kelvin Rosado will travel to Milledgeville to present this work.

After the presentation, Dr. Durach and Reed we will turn to the second phase of the project.