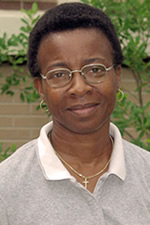 Research Interests
Research in my lab focuses on how climate change is affecting marine invertebrate larvae. The 2013 IPCC report noted that increased ice melt and precipitation has led to a decrease in sea surface salinity in the Pacific Ocean and an increase in the Atlantic. This poses a problem for many marine invertebrates with planktotrophic larval development. The Fraser River in the Puget Sound Region has a significant effect on the salinity of surface waters in spring and summer when many marine invertebrates are reproducing. Depending on food availability and physical conditions, planktotrophic larvae remain in the plankton for as little as 14 days to over 228 days. Larvae could thus be exposed to low salinity in the surface waters for a considerable length of time. Recent studies in my lab indicate differences in, morphology, vertical distribution, and proteins expressed by larvae exposed to multiple low salinity events during development. Gel electrophoresis followed by mass spectrophotometry revealed up-regulation of several proteins involved in cell volume regulation (e.g. a multi-specific organic anion transporter, calcium transporting and Na/K ATPase). Future studies will address where in the larvae various proteins are expressed and how much is expressed. My lab is also interested in determining whether protein profiles of eggs vary with the amount of exposure to fresh water from the Fraser River in the Puget Sound Region. We hope to carry out similar studies on juvenile fiddler crabs found in Georgia’s salt marshes.